Something about E3: The Key To Victory 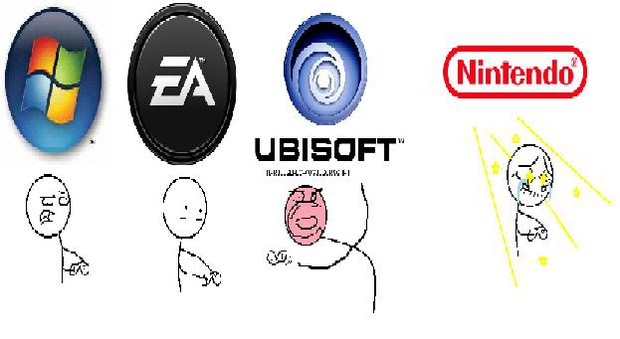 They know when to leak

Then we come to the leaks. This is also something Nintendo has carefully monitored. What games did we know about? Donkey Kong, Goldeneye, heck we even saw some Kid Icarus concept art from time to time. This was all done to keep interest in the franchises so that we'd get even more excited. Nintendo is king at fanservice. They know how to string along fans providing them with the info on their franchises they desire. They give them juuust enough info to keep them excited until the official announcement.

Seriously, just look at Kid Icarus. How many of you guys squealed like a little girl when Kid Icarus: Uprising was announced? Probably a lot of you. I did too. Now how many of you have actually played Kid Icarus? I certainly haven't. Would you consider the franchise as being high profile? Does the quality hold up? Now we get a brand new game and its like it's a long running franchise that we devoted hours of our time to, and yet all we've seen is a trailer. (A really good trailer mind you, but we know borderline-nothing about the gameplay.) This was all planned. Of course, the concept art was always present, but think about Pit's appearance in Super Smash Bros. Brawl. They took time to establish Pit as a character, gave him some time in the spotlight. Meanwhile, the very same development studio that made SSBB is now hard at work giving him a proper next-gen sequel. They've been secretly gathering interest in the game, even to those that haven't even played the previous games.

And you know what? That might not be the only game Nintendo has planned with that strategy. We already know that Dr. Andonuts had his own door at E3. Why would he get his own door at E3? They could be screwing with us, but you know who else was in Super Smash Bros. Brawl? Ness and Lucas. Nintendo keeps hinting at a new Mother game every once in a while, they could be ready to reveal it. TGS is just around the corner, guys.

Then, just after the conference, this list of games was leaked onto the net. Every game under the sun was there. And in the middle of Sony's conference, Nintendo leaked screenshots for a remake of arguably the greatest game of all time, The Legend of Zelda: Ocarina of Time. Nintendo had enough of a list to keep people talking about it, maybe even believe it was too big to mention during the conference, (which it was) make it seem bigger than it was.

All of this, combined with the amazing hardware and software lineup of the 3DS, and Nintendo seems just about ready to return to their fans. The amazed everyone because they understood how to market everything properly. They took what they could from their casual market, and they came back in a huge way to their traditional audience, while Microsoft and Sony are fumbling with their motion controllers, Nintendo seems convinced what their plan is from here on out, and they made that very clear at their conference. Again, I'm not saying that we should be calling them out for what they've done. They're simply doing their jobs. And we as the consumers now get almost exactly what we wanted to show up at E3. That's why they "won" E3.

That, and the fact that KIRBY IS MADE OUT OF FREAKIN' YARN.
#Community    #OpinionEditorial
Login to vote this up!