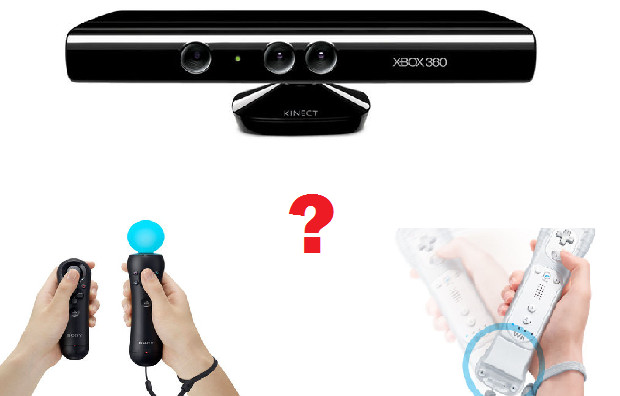 Motion Plus, Kinect, Move? Too many choices!
Now, this is a problem that is just starting, and I'm not entirely sure if it's a problem or not, but whatever, here we go. By having three separate motion controllers, we don't allow developers to work with one specific paradigm and figure out how things work. Maybe something will work better on Kinect, but fail when it comes to actually holding a controller. Maybe will start seeing multi-platform games for Wii and Move, or maybe the graphical difference will just cause such dreams to crash. I'm not sure how releasing games on the three of these distinct control schemes will work.

However, the reason I do state that maybe this isn't such a bad thing is that, much like consoles of the seventies, having multiple control types will reveal which one is superior, or at least, reveal what doesn't work. But maybe I'm being too sceptical about the differences of the three. Maybe they do have enough similarities that it will give developers a window to operate in that the lessons learned with one can be applied to others.

All in all, motion controls are a scary thing, and one I'm still incredibly sceptical about. I don't see anything in the near future that brings me vast amounts of hope, but their is still hope none the less. I still get excited at the thought of immersing me into a game more by using motion controls. Whether it be keeping a remote at my hip to represent a sheathed sword or the experience of having a proper western duel, I still think there are lots of things to explore with this weird and wacky control scheme.
#Community    #Rants
Login to vote this up!