Something about E3: I'm sick of game journalists complaining about their jobs 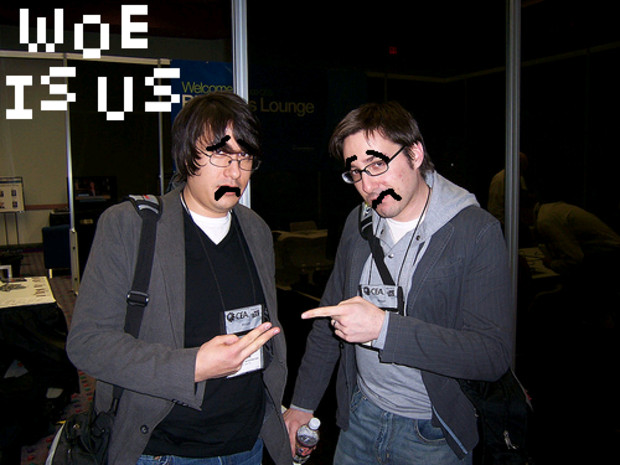 The Electronic Entertainment Expo is upon us, and that means several things. Microsoft, Nintendo, and Sony will all be vying for your attention, some unexpected announcements will be made, and videogame writers from sites across the Internet will complain because for one week out of the year they actually have to work hard. So for those of you out there looking for sympathy because you have to wake up at eight in the morning to make it to Nintendo's press conference, I bear a message from the rest of us: SHUT. UP.

Let's face it. If you are doing what you're doing, and you're able to pay your bills by writing about games alone, you have a dream job. Now, when people say that, Douchebag McGee (fictional game journalist) may retort with something like, "I don't really understand why people covet games journalism jobs. You don't actually get to just sit and play games all day. It's the same as any job with the same amount of drudgery." But if you even get to play for only an hour a day to do your job, then that's an hour more than most people with any other job get to play while at work.

To step back a bit, let's take a look at the six major factors that contribute to job satisfaction, according to a 1998 study. They are:

Starting from the top, I'll concede that the pay in game journalism is certainly less than ideal, especially among enthusiast bloggers as opposed to corporate journalists. Very few can make a living off of writing about games alone, but those who do are very fortunate, and some even realize it.

Skipping hours of work (we'll come back to that), the next item on the list is future prospects. At first, it seems that videogame journalism scores pretty poorly here as well. What does a game writer become when he is promoted? Super game writer? It appears to be an end of the road kind of deal. However, there is anecdotal evidence of a man going from writing simple blogs to now working at Microsoft, or another guy starting in the same place but ending up as a star in a popular webseries and a writer for Gearbox. Simply put, if you're good, you've got places you can go.

Difficulty is an interesting topic, as it's not necessarily true that easier is better. One of my previous jobs was in data entry; sitting at a computer copying information into a form is about as mindlessly easy as it gets, and as such, it is terribly boring. For a job to be satisfying, it needs to be difficult enough for the worker to feel like he is actually necessary, but not so difficult that he can't reasonably complete his tasks. Game journalism scores well in this category, as it's clear that not everybody can be an effective writer, but for those who are, the opinion pieces, news items, and reviews flow onto the page pretty naturally.

In the interest, prestige, and independence section is truly the reason to be a videogame journalist. Admittedly, there is little mainstream prestige in writing about games, but among the game community, who hasn't heard of Adam Sessler, Brian Crescente, or Nick Chester? As far as independence goes, a more valuable job lets the worker feel like he controls what he does on a day-to-day basis. While a writer may be given the task of "review Game X before Time Y on Date Z," he still has control over exactly how he tackles the assignment. He is at liberty to decide how much of the game requires playing before an accurate review can be written, and he chooses what kind of tone to use in his writing.

Still, prestige and independence are nothing compared to what ought to be the main reason anybody becomes a videogame journalist: interest. Are you passionate about games? Do you love writing about your hobby? Do you enjoy your time working, or do you view it as "drudgery" and you look forward to the end of the day when you can go home and forget about games until tomorrow? Simply put, if you're interested in videogames, then spending your day writing about them should be a pleasure, not a chore.

There is a stigma among gamers, one that is waning more and more as time goes on, and has been outright disproven by this very community, and that is the idea that we are lonely and friendless. Interpersonal relationships are something that game writers very certainly build up while doing what they do. A wise man once said that the secret to his success was in the idea of buena gente. By surrounding yourself with good people, good things will come. And the interpersonal relationships one can build while working with buena gente are fantastic.

So far, game journalism looks to score pretty highly as far as the six factors go. While the pay could be better, the rest make the job seem ideal to anybody passionate about games. But we skipped over the topic of hours, as that is what specifically relates to E3. During any time of year outside of major events like E3, Gamescom, or TGS, the hours seem pretty sweet to an outsider. Some work a standard eight hours a day, some work fewer, and some work more, all depending on how much time a person can commit to the job. The nice part is that a game writer can choose specifically which hours he works, in addition to how many. Night owls can put up posts at three in the morning if they so choose.

During events like E3, however, the industry goes into overdrive. Now, I am not trying to discount just how much work is done during a week like this one. Sixteen hours days for a week straight is not easy, and the work ethic necessary to keep that up is commendable. However, there are people who work twelve to sixteen hour days on a regular basis -- not just for a couple weeks out of the year. Tactix is a graduate student in Organic Chemistry, which is known for having consistently brutal hours. He still does it because getting a Ph.D is worth all of the work for him. Ark is an animator at Dreamworks, and he regularly works insane hours as well. Again, the job is inherently rewarding enough that it is worthwhile in his mind.

And that's what it all comes down to. Game journalists: do you love your job enough that you can endure a week of long hours and come out of it exhausted, but with a smile on your face? If not, then I'm sorry to say, but you're in the wrong business. If you want to gain sympathy from us regular people because you had to stay up late to finish writing about the game that you got to play a year before its release, then please do the following: shut up, quit your job, and make room for somebody who would appreciate it, "drudgery" and all.
#Community    #OpinionEditorial
Login to vote this up!