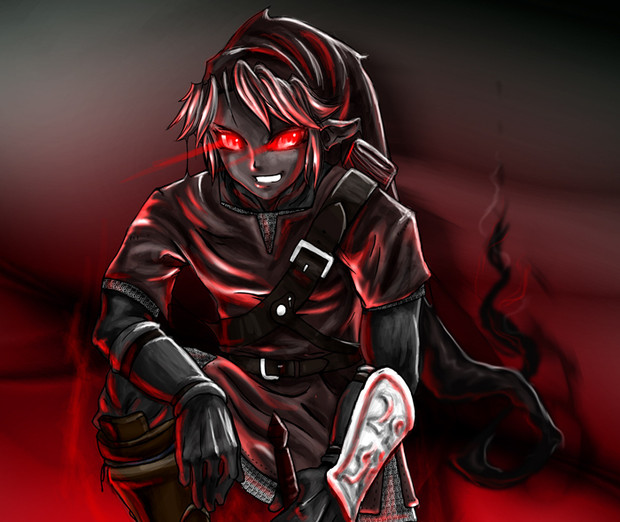 Yep, you read that title right. And no, it's not something I'm asking: our friends over at Zelda Universe are the askers of such a question on the eve of E3. The article's basic premise talks about how people tend to find straight archetypes of good and evil boring and then transposes that onto the Zelda franchise, which for better or worse, has a pure good hero (Link) and a pure evil villain (Ganon) with little gray space in between the two. Our author's remedy is to give Link more of an emotional edge or a flaw, so that instead of being some paragon of virtue, we can see he's just trying to do the most good he can and defeat evil.

But it is, perhaps, a point that I'm not quite sold on. I have lobbied for changes in the Zelda franchise's storytelling going forward, for the simple fact that unlike the Mario Bros. games, retelling the same story over and over again with a few new twists isn't going to work for Zelda because Zelda needs a strong story and Mario really doesn't. And that is, of course, what they have been doing for the better part of ... well, almost 15 years now on the consoles. And Twilight Princess' eerie similarity at times to Ocarina of Time hasn't helped sway my mind on that.

Still, I'm not sure anti-hero Link is the right choice, and by the definition the author of the piece is using for anti-hero, I'm not even sure Link isn't an "anti-hero" of sorts:

"An Anti-Hero is: generally considered to be a protagonist whose character is at least in some regards conspicuously contrary to that of the archetypal hero, and is in some instances its opposite. The anti-hero is often a reluctant hero who does not consider himself capable of accomplishing the goal. He might be selfish, addicted, corrupt, sullen or disaffected. By the end of the journey the anti-hero typically transforms into a fuller, happier or more complete person due to the struggles he or she endures."

Sure, it doesn't describe Link to the letter, but isn't Link often a reluctant hero, especially in these more recent games and namely in Wind Waker? And doesn't he become a more complete person by the end of his journey? And if so, what does making Link an anti-hero really add to the story?

Personally, I'm not actually sure it adds much more but some way for players to personally relate to Link, and since Link's something of a blank slate anyways (especially with no voice acting), is there anything more we need to do to really have him relate to the player? Since so many heroes now a days are anti-heroes, would bringing Link down to their level help ... or would it make Zelda more forgettable in a sea of games with anti-hero leads?

What's more, our author suggests possibly giving Link a characteristic of one of the Seven Deadly Sins. Personally, I've read over his examples, and I don't just find them weak: I find most of them a bit un-Zelda like. The only one with any appeal would be Envy, which turns Link into a part-time thief who becomes a reluctant hero ... but that's also been done before, and done to death. It's not the direction Zelda really needs to go.

I don't know, I just don't see this as the solution to some of Zelda's staleness problems. I still think stepping away a bit from leaning so much on Ganon as the antagonist and Zelda as the helpless damsel in distress would help, but in a few days, we'll get a taste of just what Nintendo's planning. I just hope it's not turning Link into Kratos* ...

(*OK, maybe that's hyperbole, but I ask you: do we really need a more flawed Link?)
#Community    #Rants
Login to vote this up!