Why Jet Grind Radio is enough for me

"Good afternoon Dreamcast. How are you?"
"Awesome, but then again you knew that."
"Oh Dreamy!"

This conversation has never taken place (outside my head) but nonetheless, it is an amazing system.

I've recently bought a Wii and I'm throughly enjoying it, and I love Nintendo, but I do not see myself falling for it like how I love love love the Dreamcast. Recently, I've been wondering why I love it so much. Besides a few fighting games and Typing of the Dead, I realized something strange.

"Hey, I rarely play my Dreamcast!"

Then why the infatuation? Maybe its the accessories, such as the modems, the fishing pole, the microphone, the keyboard (hells yeah), the maracas, etc. Can't be, never played many games that used them. Maybe its the hardware, from controllers to the system itself, which I don't have to worry about breaking even ten year later. Probably not, though I do admire its craftsmanship. Maybe because its a little orphan bastard that was left out to die (I bought my Dreamcast a week before Sega announced they were discounting the system and games, actually great timing because most of the games went on sale very quickly). It cannot be that though, for I hate orphan bastards.

Don't get me wrong, I love the Dreamcast. Its games are great and beautiful. But now I can't spend five hours a day playing them. I have to separate the wheat from chaff in everything in my life, especially video games. Though I never have it in my mind to play it, I always drift towards the Dreamcast. Recently, when I found found myself needing a brief respite from spring cleaning, I was ensnared by its crimson spiral.

During a particularly fierce burst of feather dusting, my Dreamcast was gleaming and just asking to be played with. I decided to treat myself with a quick salvo of gameplay before I tackled the bathroom sink (ish kabibble), so I quickly thumbed through my games.

Street Fighter III? Maybe. Powerstone 2? Later perhaps. Typing of the Dead? For sure, but not now. Ah, here we go Jet Grind Radio aka Jet Grind RADIOOOOOOOOOOOO! But I just played this the other day. WELL SO WHAT! This game is so great that I can play it anytime, anywhere.

If I had to choose only one game to play the rest of my life, there is no choice. Its obviously going to be Jet Grind Radio. But lets break it down.

The story: Grab your crew and defend your turf! Armed with some high tech roller blades and a couple cans of spray paint, use your skills to take back what's rightfully yours (and maybe a lil bit more). A simple story told well through graphics, art direction, music, and of course Professor K, the ultimate radio pirate. Avoid the cops at first, then it delves into a mystery surrounding a record and a cooperation that wants to use it to summon demons to take over the world! Well, so much for a simple story. The dark twists (including murder) balance out well with colorful visuals.

The graphics: The revolutionary cel shading graphics still hold up. Its blocky and colorful nature invite the player in with a brazen vogue. "Yeah, we cool, let's roll." It was the first game to feature cel shading which was a direct influence in the creation of The Legend of Zelda: Wind Waker among several other games. 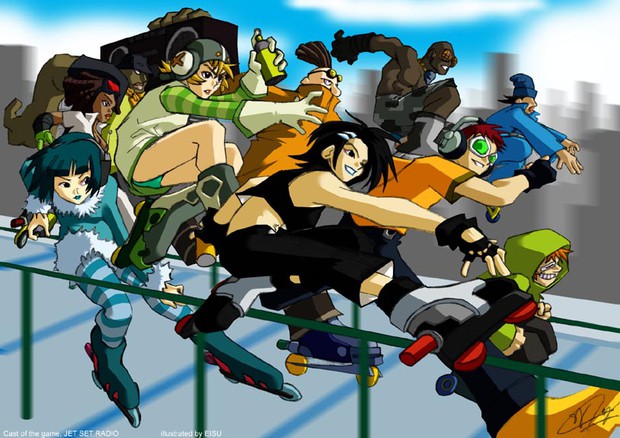 GG on the Go by *eisu

ps if anyone wants to help me unlock Potts, let me know.
#Community
Login to vote this up!