3:47 PM on 06.04.2010 (server time)    0
I was going to actually break a law here on the Destructoid and write two blogs in one day but my time is running out so I'll have to just post this. It's fair to say it's been a busy little while. I manned my position in retail hell once again, had my phone line/internet connection cut...for the second time (thanks city for hiring incompetent workers) and I just happened to get a........LOLOMGXBOX360COUGHWHUT?

But nevermind that for now, as this is a dedication. A dedication to a great man, a noble man, a not so frugal as the rest of us man. This...is a dedication to Enkido. Yes, that's right, if you don't know who that is you should have already clicked that link. American Redneck to some, leader of men to other (MAG players) and bringer of Valve to me. Let's get serious here though, what Enkido did was provide a need. I had personally decided after all the rabble rousing around Valve that I would infact check out and purchase The Orange Box. I figured, why not. People cream themselves over Portal and thus I had a interest there. So finally, a few days ago this arrived. 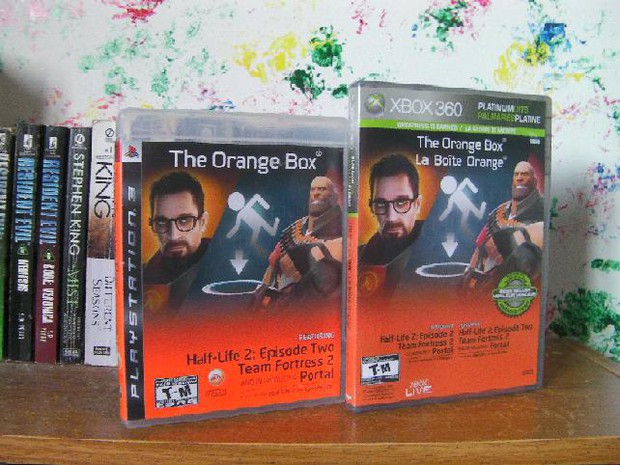 Being a word detective is fun. If you couldn't tell, there were a few sentences up there that were attempts at foreshadowing. If you caught them, you've earned your cub scout badge for the month. I had mentioned to my friend James my interest in getting The Orange Box but only being able to find a copy of it for the X-Box 360. I'd also told him of my plan to get a WHUTSTFUXBOX360LMAO and thus you can probably guess what happened by the above picture. He picked up the exact same copy I found as a gift and gave it to me. It literally went like this. I got Enkido's letter and The Orange Box for the PS3. Thanked him and had my phone line cut. Knock at my door. Answer and it's James. Was given The Orange Box for the X-Box 360. It was definitely interesting timing. Though I should assure Enkido that the PS3 version is getting played no matter who plays it. I know I've enjoyed the hell out of it on the PS3 with a run through of Portal and a couple games of Team Fortress 2. I've also checked out the 360 version with it's "superior graphics" which is true but still and since now there's more gaming love going around than ever that the copy you sent will get played. Infact I think the brother started a game on Half Life 2. Then again he did recently start games on 3 other HACKBBQXBOX360WHEEZEFART games with the intent of finishing them...whenever.

In the end even though this took a hell of a long time, I'd just like to say thanks to Enkido with gifting me with The Orange Box for the PS3. It was super cool of him to send it based upon the fact that it'd get more love with someone else. Only On Destructoid my friends.
#AboutDestructoid    #Community
Login to vote this up!