1:00 PM on 06.04.2010 (server time)    0
People seemed to like/hate my Prince of Persia review so I figured I'd start these up again for now. I got behind as I should also have a review for Get Him to the Greek, but I'll just say that it's definitely as funny as Forgetting Sarah Marshal and the funniest film to come out since The Hangover. 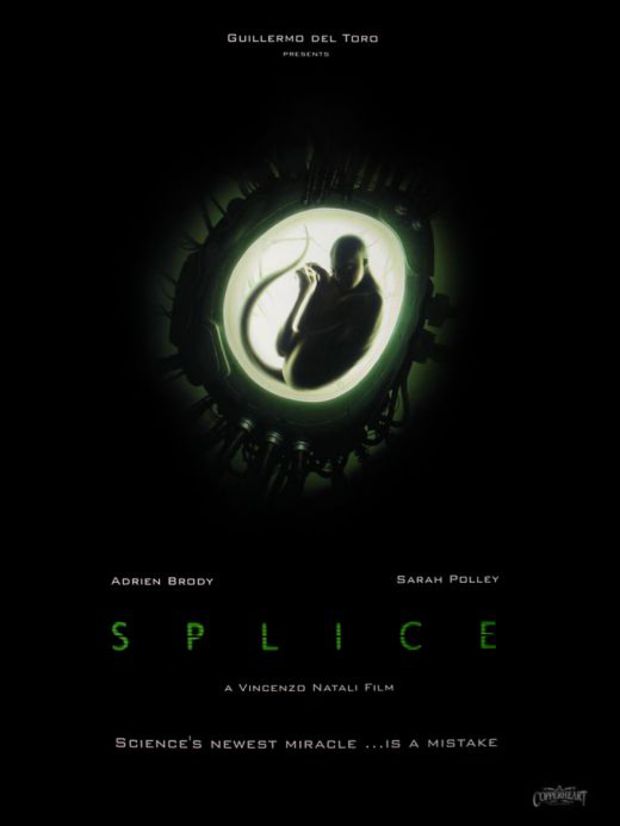 Splice is the kind of movie you have to sleep on. Give it a little while to ruminate before you know if you've just watched something interesting and provocative or just plain weird. It's hard to say where you will come down on it. It's easy to see anyone falling on either side of the delicate line between oddness and brilliance. For me Splice eventually settled comfortably into brilliance, but it's still really weird.

Despite the horrendously cliché trailers for Splice that simply make it look like a bad Species clone without Natasha Henstridge running around naked, the film is actually nothing at all like that. It's actually nothing at all like anything you've seen before. The basic premise is familiar enough: a pair of scientists - in this case a couple named Clive Nicoli (Adrien Brody) and Elsa Kast (Sarah Polley) - create life out of nothing by splicing together the DNA of a human and some other animals. In most cases you could easily see where this was going, but Splice avoids the standard monster-created-by-man formula and veers off into something completely different.

What you get instead is a film about love, creation and parenthood, and a film with some seriously messed up moments. After Clive and Elsa create the creature that they eventually name Dren they start to raise it like a child, attempting to keep it secret from the rest of the world. Dren, of course, grows up quickly into a disturbingly beautiful woman-thing with chicken legs and wings. And while she is deadly and dangerous the film instead focuses on Clive and Elsa's ability to parent and their messed up reasons for creating life in the first place. It twists even further beyond that, but I'd hate to ruin some of the film's best and most awkward moments.

What the great Vincenzo Natali does with Splice is take a genre that has constantly dodged its moral and emotional questions by opting for scares, gore and sex and let the questions that should arise actually arise. It makes for a fascinating film that may disgust, confuse and repel you at first, but starts to get under your skin and makes you think. I'm not about to say that this is a work of high-art as it clearly wants to shock as well and parts of the film can falter, but this is a drastic shift in pace and focus for any movie of this ilk.

Aside from the story being different, Splice is a pleasure to watch as well. Natali still works the camera just as well as he did in Cube and while the digital effects are not the best you've ever seen, they work splendidly for the film. This is especially true when it comes to Dren, who is played by Delphine Chanéac -- or at least her top half is. Dren walks on legs that look somewhat like a bird's, and the blending of Chanéac's top half with these digital lower legs is fantastic and superbly done. In fact during one particular scene you see all of Dren (and I mean all) and the work done to meld the real into the fake is highly impressive and a little disturbing.

What can't be said about Splice is that it isn't original and insightful. You may leave the theater not quite sure what to think, but you will definitely know that you just saw something unlike anything else you have seen before. In an industry of cookie-cutter filmmakers and movies that seem all to the same Splice delivers something different, and it's hard to complain about that.
#Community
Login to vote this up!