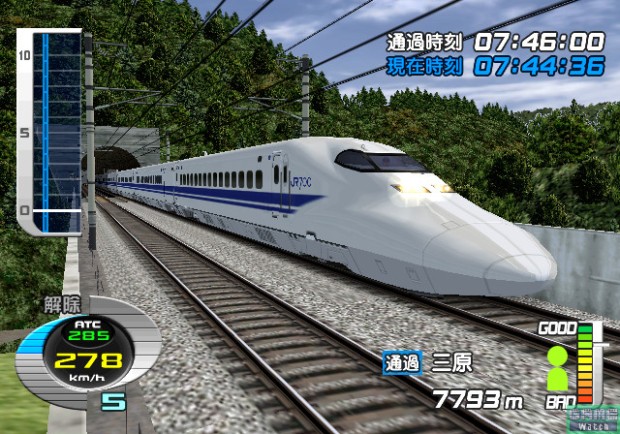 “Densha de GO!” (roughly meaning “Let’s GO! by Train”) is a quirky train simulator Japanese series. Its game design reeks of distilled arcade elegance – players can only accelerate or brake using a single lever, the goal being to drive the train at an appropriate pace, passing checkpoints below established speed-limits, while keeping schedule and avoiding abrupt stops. Its apparent simplicity betrays its overwhelming depth: as you progress you’ll find yourself nervously changing acceleration almost on a second-by-second basis, hopelessly trying to maximize your train speed as the game continuously harasses you with new constraints. Gameplay presents that delightful addiction which only pure games possess, as one feels motivated to always struggle to improve in that fine art of train conducting. 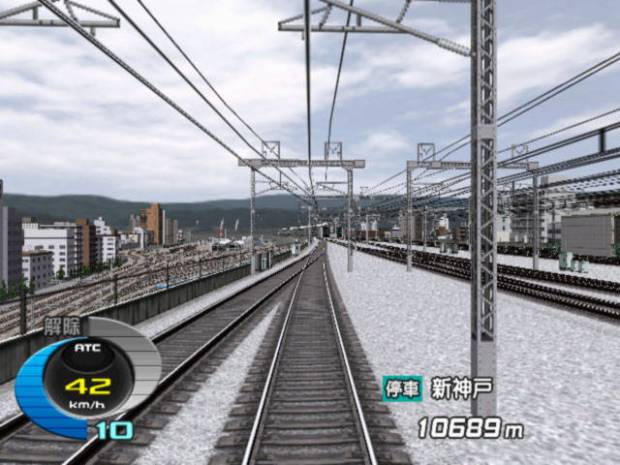 But, however well designed the game may be, especially when compared to its byzantine western counterparts, its essence only emerges in the obvious care which was placed in the simulation of the train ride experience. Train’s rhythmic humdrum, sirens signaling arrivals and departures, conductors’ announcements, the hustle and bustle of daily-life as people enter and leave the train, the changing weather conditions across the vividly portrayed landscape – everything is emulated for you to feel as if inside a train. This is where “Densha de GO!” creators show off their national obsession with trains, a sociocultural passion born from the intimate relationship that arises from working class men’s need to travel each day to and from work by train. And so, just as westerners admire the elegant lines of a red Ferrari, so do Japanese admire the slick lines of the bullet train. See, their intimacy brew love, and from that love transpires the game’s almost absurd reverence for all things train – their brands and models, technical features, design, specific routes and stops – all constantly mentioned for the delight of the passionate train fans. 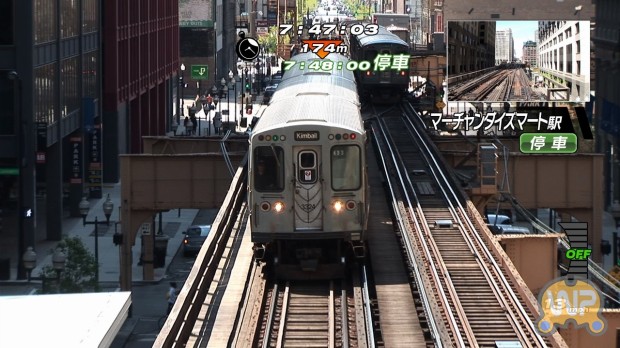 This heartfelt desire to homage train rides as some sort of quasi-mystical experience, lead to some of the most interesting titles in the genre: those that employ live audio/video feed of actual train rides as substitute for computer graphics and sound, the “Train Simulator” series (of which the PS3 “Railfan” titles are the most recent incarnations). In these, immersion is downright perfect as you actually witness the train ride as you play, overcoming the reality wall in which so many video games stumble upon. If you’ve ever travelled by train and basked in its view, you will appreciate the possibility of doing so by means of a console, braving through sights and sounds that you’ll probably never gaze your eyes and ears upon, while enjoying a thoroughly entertaining game. Japanese infatuation with trains will surely find a bonding connection with you, therefore achieving the game’s noblest goal – to take you to that special place from whence all love for train stems, in the process serving as an enticing vehicle of cultural expression. And what hidden wonders and lost memories lie in wait, hoping to be evoked by the sweet lulling of the train, as it whistles away through glorious landscapes in its tantalizing, nervous craving for a destination?
#Community    #reviews
Login to vote this up!