Albert Camus, a well known novelist and essayist once said, "In the face of contemporary political society, the only coherent attitude of the artist, unless he prefers to renounce his art, is unconditional rejection." 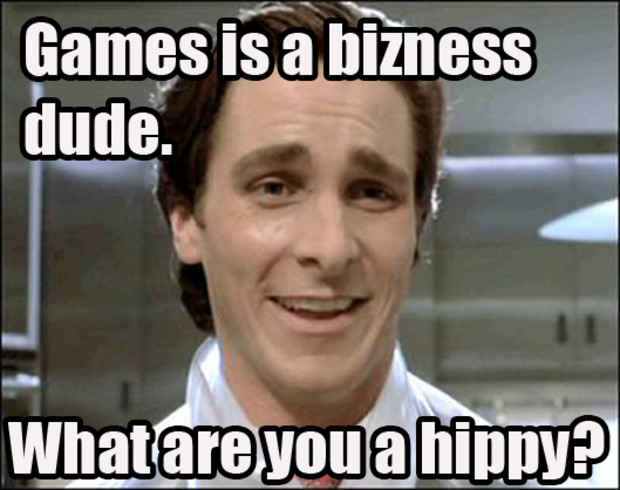 I believe one of the most critical obstacles holding games back from achieving this defiant attitude is the dominant business-centric approach concerning their creation. Since the earliest days when developers sold disks in sealed plastic baggies, games have been for the most part produced for profit; by their very nature they have avoided doing anything that would threaten or isolate a potentially large audience. In honor of a fellow Dtoider I'm gonna call this...

In a recent blog EternalDeathSlayer was spot on when he said the following, "...the gaming industry exists for one reason and one reason only: To make a profit. That's it. There is literally not ONE major publisher who is trying to change people's lives, enlighten anyone, or even make somebody happy. They could a rats ass. Even Valve wants to make as much money as they can, as they proved by making an (admittedly great) sequel to Left 4 Dead only a year after it came out. Some companies like Valve do care about fans, but even the support and care they show is all part of keeping customers around so they can spend more cash on the games they sell."

(I feel I have to mention EDS seems to have a very different outlook than mine when it comes to a profit centered approach to games, but even though I don't agree with his conclusions I do believe the above statement is pretty accurate. You can check out his full blog here.)

This principle of course runs counter to the Camus quote above. It undermines what I personally feel is the most important ingredient towards creating a meaningful work of art. The spirit of 'FUCK YOU.'

Think of the many counter cultural movements: Punk in the later 70s early 80s, the surrealists and the dadaists of the early 20th century, the No Wave musicians of the early 80s, Early Rock of the 50s, The New Hollywood movement of the 70s, The French New Wave of the 60s, The Italian Neo-Realists. Most of these movements were a rejection of accepted norms both in their respective fields (music, art, cinema) and of society itself.

The creative people in those movements were not motivated by the pursuit of profit, they were motivated by a spirit of rebellion. They wanted to shock the system, to change what was acceptable and to challenge conventions.

I look forward to the day when a game appears motivated only by the need to rock the boat, to insult and provoke, to shatter taboos, to tell us truths no one wants to hear. What Vargas Llosa describes when he says,

"Saying no, rebelling, demanding recognition for our right to dissent, showing in this living and magical way...that dogma, censorship and arbitrary acts are also mortal enemies of progress and human dignity, affirming that life is not simple and does not fit neatly into patterns, that the road to truth is not always smooth and straight, but often torturous and rough, showing time and again ...the essential complexity and diversity of the world and the contradictory ambiguity of human events."

But the EDS principle is hard to shake, nowadays games are extremely expensive to produce and the whole business framework seems to be set in stone. It makes sense to produce games that appeal to Lowest Common Denominator to ensure a recoup of the huge investment. The incentive becomes to create games that are focused on entertainment made with the intention to provide mindless distraction and constant satisfaction. Not all games follow the above paradigm, but unfortunately most do.

This is not necessarily a bad thing. Many great and extremely creative games have come out of the business centered approach. Movies and books also follow this approach with some pretty effective and gratifying results. For every recalcitrant, culturally aware and subversive Lars Von Trier and Takashi Miike movie that's produced there are a dozen Iron Man and Transformer flicks made with the sole intention to entertain. But with games this dichotomy doesn't even exist yet. It's a one-sided deal - we are constantly bombarded with tons of games which are the equivalent of Iron Man and barely anything that aspires to be as intentionally seditious as the film 'Anti-Christ.' Maybe because of this, no game has yet arrived that was capable of giving me that intoxicating sensation of having my mind blown.

The game that "changed my life" has yet to appear, but I can feel it out there in the shadows, its subtle footsteps drawing closer. Somewhere in a suburban basement or perhaps in a Lower East Side Studio a group of maverick developers is at this very moment putting something together that will make Vargas Llosa and Camus' corpse smile proudly, as the tradition of resistance I handed down from one art-form to another. And the way we look at videogames will never be the same again.

If you made it this far, thanks for sticking with my overdone ramble. I look forward to hearing any thoughts and disagreements in the comments below. I may also follow this blog up with a few other sections if there is enough interest.

Lazaro Cruz once tried to join the Wu-Tang Clan but was kicked out because of his unpredictable nature. In his free time he enjoys overdosing on trashy B-movies, siccing his dog on Mormon proselytizers that visit him at home and founding a new religon based on the tenets espoused within Kung Fu movies. You can email him at [email protected] or check out his twitter feed at http://twitter.com/LazaroCruz.
#Community    #Rants
Login to vote this up!

A Fistful of Lists:


Short List of Shame:(Some of the games I really need to play ASAP)
Half Life 2
System Shock 2
The Ultima Series
Shadow of the Colossus
Thief
Deus Ex

Stuff I have recently spent my $$$ on but haven't played: