To this day, I believe Mr. Hopper to've been one of the greatest actors I had ever seen in a film. From Easy Rider to Blue Velvet, to Speed, the man was a frightening powerhouse of intensity.

And, like many my age, my first time seeing him was in the Super Mario Bros. movie. 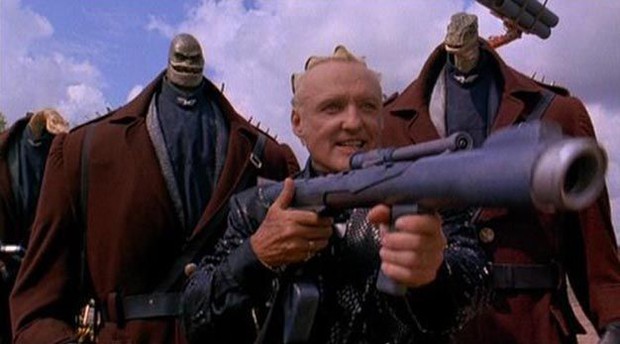 As a kid, I loved this movie. I knew it was weird, and I knew it had nothing at all to really do with the games I loved, but, none the less I adored the movie. Admit it, there was nothing as unique or off the wall as this movie. Alternate dimensions with fungus people and dinosaurs evolved villains? Goombas as giant turtle men? Rocket boots, toy bombs? Electric cars? It was all so uniquely and terribly brilliant. Also, Fisher Stevens was in it.

But, among them all, Dennis Hopper, in a role that could've easily been phoned in, was at the top of his game. He brought a bizzare villainy to the role, that I would later see to be more slightly ripped off from his role in Blue Velvet, but I was hooked none the less. Later, I would see Speed, another so bad it's good movie, and Dennis was no less the insane intense villain.

Life would go on, I would see him in everything, Easy Rider, Apocalypse Now, Hoosiers, and Crash. Everywhere he went I was enthralled. I even liked Land of the Dead because of him, even though his appearance there was mostly phoned in.

Anyways, just though I'd get that off my chest.

Gonna go play the underrated Deadly Creatures and watch some of his movies, and enjoy what he left behind.

EDIT: Now with Fire Coming out of a Monkey's Head. Forgive me for forgetting it the first time.

My real name is Mark. But my name is also Mooks. It's short for Mookie. I want to be a writer, a director, a musician, a game designer, an actor, and a constantly awesome person. Most days I forget I'm a senior in college.

I have been gaming since I was a newborn, when my uncle put an unplugged NES controller in my hands. In some ways, I've never let go. From there I took the Nintendo/PC path down gaming lane. I had a Genesis, but the only games I had were Sonic games. My favorite game growing up was Earthbound.

I am obsessed with story in video games and am always looking for the next game that makes me laugh, cry, or think. Although I also love a good mindless shooter or puzzle game here and there.
On the topic of best stories in games, I believe these titles, in no particular order, showcase what I believe to be indicative of our medium moving forward as respectable artworks.

More to come as I think of them.

But yeah, that's it for now. See ya around D-Toid.