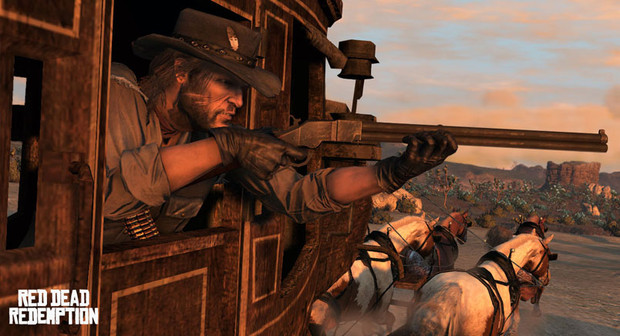 What it came down to was that playing on Expert didn't make me feel like I was John Marston. I didn't feel like the battle-hardened, semi-reformed criminal, gun-afficianado badass. I felt more like me with a gun. AKA clumsy. Now, don't be confused. These bad guys were dying by the hundreds. But it wasn't very impressive along the way. It was the same notion that drove me to re-do sections of combat in Splinter Cell Conviction that, though ultimately successful, didn't go smoothly. Sure, I'd neutralized all the enemies, but in the process I'd taken a few bullets and ran straight into lit rooms in a panic with my night-vision on. That didn't feel very Sam Fisher, so I would give the section another go.

It's irrefutable that switching the difficulty to Normal does make the game marginally easier, yes. But more importantly, it made John Marston function like he should function. When John draws his gun, it is a deliberate act. The fraction of a second it takes to remove from his holster, he means to point it at someone who is asking for it. Not slowly rotate the camera and put four shots into the broad side of a barn first. John is not able to lock-on like some sort of inhuman cyborg, but he is certainly more than capable to point his firearm at someone who needs to die with ease.

That's what I get out of aim-assist targeting. It bridges that gap from someone like John Marston's inherent ability to handle a fire-arm even in the most chaotic moments to myself, whose proudest moment of hand-eye coordination was this one time I caught both pieces of toast as they popped out of the toaster.

And it's just damn fun to have that confidence to roll into a room and blast someone away with the revolver like John was born to do.

What about you guys? Am I alone on this? How does everyone else play? Is Expert the only way to play or do you agree that Normal lets you add that John Marston gun-slinging veterancy without making the game too easy in the process?

And I think we can all agree that aim-assist in Multiplayer sucks huge balls.
#Community    #Rants
Login to vote this up!