7:48 AM on 05.24.2010 (server time)    0
Legal guardians in games are a funny thing, they usually come in one of two varieties – #1 they’re dead or #2 they’re complete dicks.......my list of gaming’s deadest parents was kind of depressing so I did this instead. You might be wondering why this is about legal guardians instead of just parents, well most video game parents end up as the first variety (probably so the main character can go seeking revenge) or their revealed as a “surprise” boss, so many game characters end up raising themselves, going into foster care, or never talking about their past.

Just think about it, how many NCP children have you orphaned in your time? Sure they were hired tugs, brutal murderers, or non-specific Middle Eastern terrorists but some of them were bound to have kids. It all leads me to believe that Videogameland is a place where everybody is getting laid, but they’re too busy being mercenaries or racist stereotypes to take responsibility for their children, leading to a constant turnover of life and death where many children are left to fend for themselves. But all things considered they’re the lucky ones compared to the kids who are raised by their parents, next of kin, or legal guardians. 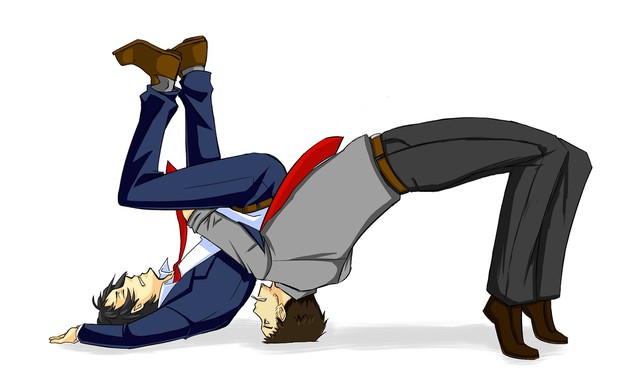 We don’t know what they look like so here’s more Dojima!

What the hell guys!? It’s been a year and you haven’t given your son so much as a phone call! What the fuck are you Japanese spies or something!? It’s bad enough that you send him from town to town on a regular basis, never letting him make many friends for long, but now you’re gonna stick him with his uncle who can’t take care of himself without the help of a six year old!? Actually, I think they died within the first week of the game but Dojima thought that with going to a new school and the murders in town and everything else going on he should probably hold off on breaking the news just yet.......then maybe he got drunk and forgot or something, which just further solidifies his place on this list!
#Community    #Rants
Login to vote this up!