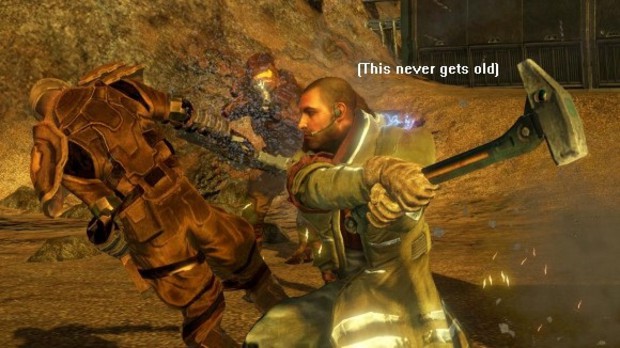 School's finally out, summer time is here, and that means there's plenty of more free time on my calendar for gaming. If you're the type of game I unfortunately happen to be (lazy), then there's probably a long list of games you've been meaning to or want to play but have just never gotten around to it, for whatever reason. Well this summer I've decided to try and knock out as many of said games as possible, especially now that my Goozex account has caused me to acquire a nice little pile of games shouting "Play me!" So I decided to sit down and write up a list of games I own that desperately need to be played and beaten. It's not a terribly long list, but it should last all summer (with maybe a few others added on if I can't help myself from buying more). First up on the list: Red Faction: Guerrilla. I had heard a few things over the past year that it's been out, but have never really seen any game play or anything. I did hear nothing but generally favorable things about it though, so when I saw it for cheap I decided to pick it up.

This is now one of my favorite games and all I have to say is, "WHY DID I NOT PLAY YOU SOONER?"

After watching the opening cutscene, and then finally getting to walk around while your brother gives you some objectives, I thought to myself, "This doesn't seem like it's going to be so bad. At least the cutscenes aren't three hours long." Then he tells me to demolish the abandoned site in front of me and collect the salvage. That first swing with my sledgehammer was on of the most satisfying things in my gaming life. And the swing after that, and the swing after that, and then the freaking EXPLOSION after that! I just knew from that moment on I was going to have a (wait for it).....blast! The missions are fast-paced, and never seem to get old or too frustrating. The story, although nothing life-changing or touching (but what else would you expect), is still entertaining enough to stay interesting till the grand finale. This is certainly my new I'm-pissed-off-at-everyone-and-everything-and-just-want-to-blow-things-up-game.

I'm not here to write a review or anything, so I won't go on and on. But I'm more than happy to be able to put Red Faction: Guerrilla on my "Played" list.

Oh, and did I mention how satisfying it is to swing that sledgehammer? Seriously, running up to an EDF drone and smacking him with a killing blow never gets old. Hell, I barely even used anything else to kill them the entire game. You also know a game is great when on a mission to take out eight snipers, you can whip out huge rockets and blow the whole building up, killing them all in one shot. Unless of course a civilian runs right in front of you causing the rocket to hit him instead, killing everyone and yourself.

After this much balls to the wall action, I searched for the next game on my list that could be on the same level of intensity. Next game on the summer playlist: the God of War Collection for PS3.

PS: For those interested, here's my Summer Playlist. It'll probably change, and feel free to suggest additions. Thanks!

There's an infinite number of games I would love to play, but these are the ones that I actually own and need to beat. Well, most of them anyways. Any of you happen to have a list of games you're working on completing?
#Community    #Rants
Login to vote this up!

Hello, my name is Allen, and I'm a gamer. The addiction started at the age of 7 when I received a Super Nintendo with a copy of Donkey Kong Country for Christmas. Ever since then, my hands have been glued to a controller.