10:53 AM on 05.15.2010 (server time)    0
[Disclaimer: This blog does not represent the views or opinions of Enkido as he exists in a sane state and he cannot be held responsible for the content expressed in this article. For real, he is having a moment of extreme insanity, take advantage while you can. Also, cocks.]

So here is the deal Destructoid. Valkyria Chronicles is a game that I love very much. I believe that it is one of the best games on this or any other generation. In fact, if I were to really sit down and think about it, it may very well be a very big contender for my favorite game of all time. However, I also believe that this game did not sell nearly as well as it should have and thus many people are missing out in my opinion. So what was I to do? Well, I love this game and I love this community, and so in a spontaneous fit of insanity, I decided to share the love. 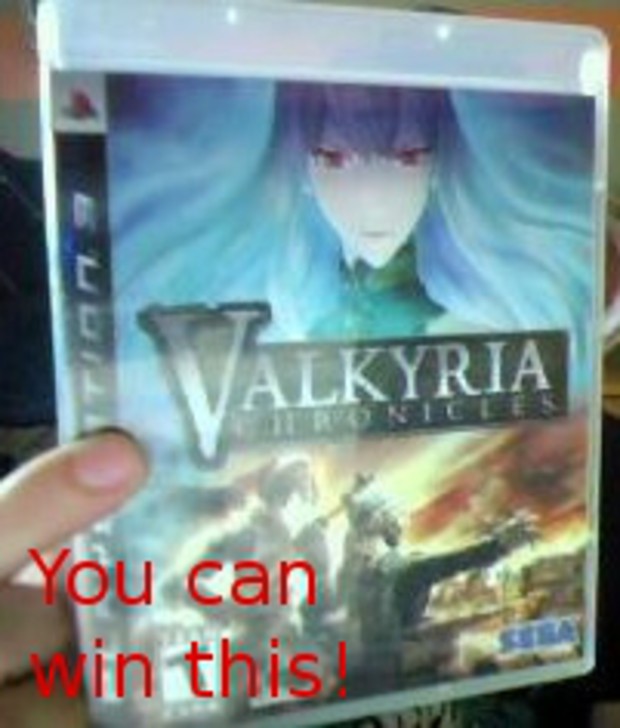 I am offering you, the Destructoid community, the chance to win my copy of Valkyria Chronicles. Now, I don't want this game going to just anyone who posts a comment, so I am going to have to make you jump through some hoops to earn a chance. I am going to ask 3 questions that are somewhat game related and you are going to have to put your internet sleuthing skills to the test. Private Message me your answers and I will put the names of the people who got the answers right in a drawing for the game. DO NOT, I repeat, DO NOT put the answers in a comment, as doing so will probably void the contest and make me as sad panda. Also, due to shipping and Handling, I am unfortunately going to have to limit this contest to my continent, so if you live anywhere other than North America, just know that I don't love you.

Questions:
1. The characters Vyse, Aika, and the Medic are all cameos from another game. I want you to tell me the name of the game that they are from as well as the real name of the Medic and her sisters. (Hint: The games share the same Chief Director)

2.Hans is a Porcavian and a special member of Squad 7. What is his rank according to Alicia? (Hint: Don't bother with Wikipedia)

3.Who reviewed Valkyria Chronicles on Destructoid and what score was it given? (Hint: Really?)

That's all you need to do. I would say you have until this coming Friday at midnight, when the realization that I am going to be working and taking classes for the entire summer, makes me a bitter person again. Just PM me the answers and if you get them right you will be one step closer to owning one of my favorite games.

It may be in bad form to throw this little contest and ask for something in return but there are a couple of things I would like to ask the winner of this contest, I'm selfish like that. This is one of my favorite games of all time I would like to know what you think of it. I should like it if you wrote a blog telling me your thoughts on the game. Does a chorus of angles come down singing an aria every time you put the game in your system. Cool, I want to know. Should the developers be doomed to burn in hellfire for all of eternity for creating such an abomination. I am afraid that we are going to have to fight to the death, but again, that is something I am going to want to know beforehand. I know that there is little I can do after I ship the game off, but if you receive another random package a couple months later filled with an assortment of angry marsupials and you didn't write a blog, well you had it coming. Also, if you haven't posted before, do an intro or at the very least introduce yourself at the beginning.

One other thing I might ask is that others do the same. I want to share this game with people who have not played it. I also believe that there is a very good chance that there is a game you feel the same way about. This may be a bit harder to swallow than writing a blog, and I will understand if you don't do it, but I would encourage you, or any one else, to do a contest like this as well. Not only will you be a cool person, but you will get to share a little bit of love for your favorite game with the community.

LEGAL STUFF:
Like I said, North America. Also, you kind of have to have a PS3 to play it, so if you don't have one feel free to curse my name from the highest mountain. Don't post answers in the comments and you have until Friday at midnight. You don't have to do the things I asked, but seeing as you are part of this community I know you are awesome and won't let me down. No purchase necessary, void where prohibited. Side effects may include nausea, vomiting, loss of motor function, back ache, restless leg syndrome, public intoxication, euphoria, waking up next to large hairy women, vomiting again, and death. Destructoid needs a contest tag.
#Community
Login to vote this up!