8:35 PM on 05.09.2010 (server time)    0
So this blog post is mainly an attempt at me ranting and trying to think critically about games. However, I'm fairly new at this, so feel free to comment on me falling on my face at this.

With the announcement of Splinter Cell Conviction, I was pretty excited. Sam Fisher could be refreshed from the stale character he had fallen into, and the developers could take the character into new exciting territory. However, instead of seeing a logical course of character progression in this new light, I got a cold, murderous Sam Fisher who didn�t fit my understanding of the character.

Now, it�s been sometime since I last played the previous iterations of Splinter Cell, but I always had the idea that killing for Sam was always a last regrettable option. There seems to be no dialog hints that this is an enjoyable aspect of Sam�s vocation. In fact, Sam always seemed to be silent on the matter. If not seen through the dialog, I think it�s enforced through the gameplay.

Throughout the Splinter Cell series, the focus has been on avoiding detection, and using your gun as a last resort. This type of gameplay implies that killing is a more destructive action, and only necessary in extreme situations. This is further pushed in Chaos Theory when the scores given at the end of the level are higher if death is avoided. 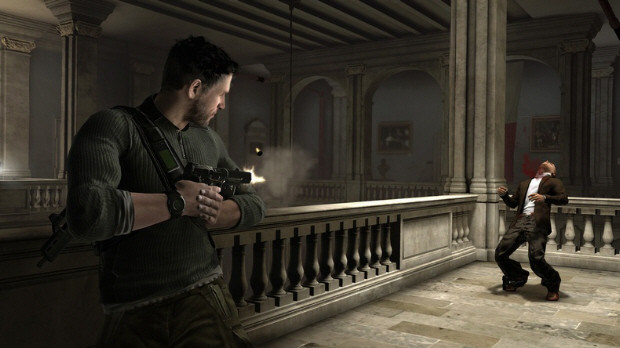 Now, the story would seem to argue that the loss of his daughter has forced Sam to go to the extreme, and no one can get in his way, but this character arc seems hard to believe when Sam is breaking the necks of weekend army reserve members; people who probably have children of their own. There�s been such a drastic character progression; it feels unlikely that Sam would suddenly start killing those hardly responsible for his Daughter�s plight.

So, this is all for me to say that I feel that the direction the developers took Sam didn�t really work for me. But, then again, most people don�t play Splinter Cell for the character of Sam Fisher, that�s Metal Gear Solid�s job.

PS. This all said, it could be that, because of Sam�s relative silence in previous games, I had just forced my own character on him, and that coupled with the evasion style gameplay of the previous games I had created this cautious killer, and I�m now just taken back by how the developers didn�t have the exact same thing in mind.
#Community    #Rants
Login to vote this up!