WTF Happened To My Game!? 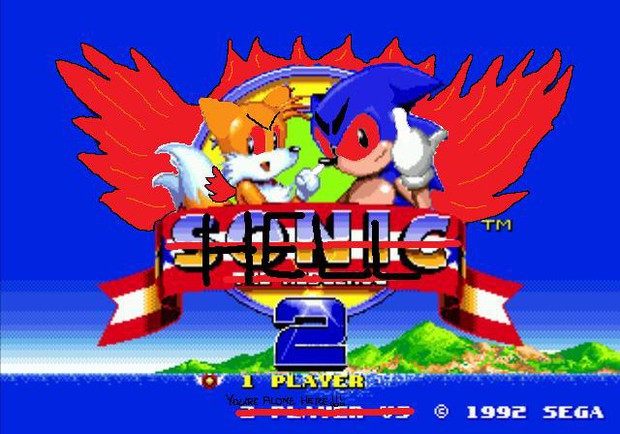 Umm� I don't remember this game being like this..

God where should I begin with this game? Oh I know, how about the shitty enemy placement throughout the ENTIRE FUCKING GAME! I swear SEGA purposely put an enemy in the the damn way every time you go fast enough to not even have time to react to it once you notice it. It happened way too often in this game and I was barely able to save up 50 rings just to do the shitty emerald stage (more on this in a second). When you get to the zones where enemies start shooting projectiles and by the time you reach them, your put in the position where you�ve got to perform a fucking magical feat just to dodge the projectile. This game relies too much on trial and error in order to beat it and god do I hate frustrating trial and error game play. Speaking about trial and error, how about those fucking emerald stages? You literally have to have each and every one of those 8 stages engraved in your mind from beginning to end. You need to know where and when every ring is going to show up, because if you don�t I can guarantee that your ass is not going to collect all 8 emeralds, leaving the awesomeness of Super Sonic something you�ll never experience because SEGA thought it would be funny to tease us. I fucking hated being one or two rings short of obtaining the emerald and as the emerald comes up to you, your unable to grab it because you didn�t obtain the sufficient amount of rings. What makes the emerald stages even shittier is the inclusion of the bombs. If you happen to hit one of these bombs, you lose a good chunk of the rings you just spent time struggling to obtain. I wanted to break my controller every time I collected the right amount of rings only to run into a bomb and lose them and not get the emerald. I gave up trying to get all 8 emeralds. It pissed me off too much and all I wanted to do was hurry up and finish the game so it wouldn�t ruin my original childhood memories of the game.
So much for that.. I took the time to memorize this whole stage.. 7 more to go� FFUUU-

I have one more thing I need to get off of my chest. It�s a little thing called Metropolis Zone.

Whose smart idea was it to add this zone in the game? I�d like to have a word with you.

Metropolis seems like it could be a fun departure from the normal linear levels found in the game. There are multiple paths you can take making each run through of the stage different from the last. Sounds like fun right..? WRONG! Metropolis Zone is a fucked up maze. You may think you�re going the right way after your well into the level, but then you come across an area that seems so familiar. That�s because you�ve already been through there.. TEN FUCKING TIMES! (Ok, maybe not ten times, but running through the same area more than twice feels like you�ve seen it at least ten times.) Oh and remember those projectile-shooting enemies I spoke of earlier? They�re the only fucking enemy type spread across Metropolis. Can I get a fucking break!? Oh yeah, did I forget to say that there�s three Metropolis zones? This is the only zone in the entire game to have a third act. WTF? Each one gets harder and shittier the further you go.

Yes! I made it through both acts..w-wait..WTF THERES A THIRD!??

As you can see I�m very frustrated with how this game has aged. After my play through, I looked back and wondered how the hell did I have the patience to beat this game in an entire sitting (There was no save feature on the Genesis). On top of that, how the hell was I able to get all 8 emeralds? I must have been some type of super gaming freak as a kid because I honestly could not perform the same things today that I was able to do as a kid.

All I have to say is, what the fuck happened to my game!?

Have any of you guys re-played an old favorite only to find out it�s not the same as it used to be? If so, share your experiences below!
#Community    #Rants
Login to vote this up!