You skin that smoke wagon and we'll see what happens! 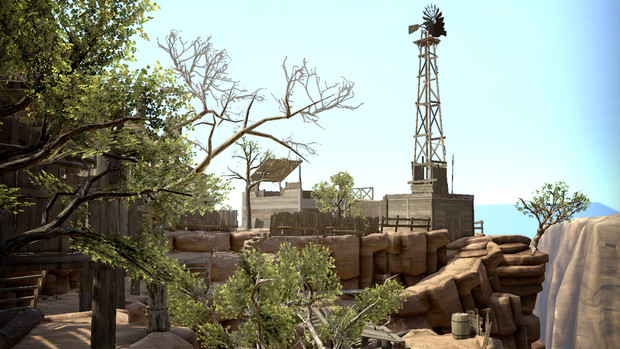 The six game modes ( as well as a practice mode ) in the game are:

Which is what it sounds like. A race to conquer control zones in sequence. One gang advances through zones A to E while the other gang advances in reverse order, from E to A. Conquering a zone unlocks the next zone in sequence. To conquer a zone, clear it of enemy presence and stay in the zone until your gang flag is completely raised. Next up is...

The objective in greed is to carry as many gold sacks to your team drop off zone as possible. A gold sack is spawned on the map and both teams struggle to bring the sack to their respective drop off zone. If a team is successful in bringing the gold to their zone they are rewarded a point and a new sack spawns at the sack spawn zone. Up next is...

The attacking team must blow up the objective/objectives using powderkegs which can be found throughout the map. The defending team tries to stop them. Be careful while carrying a keg, as it can easily blow up in your face – when the sparks start to fly, get rid of the keg as soon as you can! Powder keg is played in two rounds with each side alternating as attacker and defender. Then its ...

In robbery the players are divided into an attacking gang and a defending gang. The attackers are out to steal sacks of gold from the defenders. The defending gang must protect their gold at all costs. To reach the gold, the attacking gang is required to blow their way through using powder kegs. A Robbery match is played in two turns with each side alternating as attacker and defender.

It also has Shootout which is basic deathmatch mode and one of my favorite the co op mode where two players will play a match of Greed getting sacks of gold with each other against waves upon waves of enemy AI that gets increasingly more and more insane in difficulty. With only one life, so its all about covering each others asses. I played this mode with a certain Dtoider practically for hours.

You get all this for $14.99. For the PS3, 360 and PC via Steam. Seriously ya'll, this is a no brainer purchase. Get this shit now. Oh and get this, on the PS3 side of things the voice chat is flawless. Say what? ( Capcom pay attention to that ) Seriously surprising fun game and if you couldn't guess by my excitement of this game, it will be featured on the next PS3 Friday Night Fights. Any tough hombres out there want to throw down with me? Or are you going to stand there and bleed?

Almost forgot to mention, yes you can shoot the hats off of people's heads. Hell YES.
#Community    #reviews
Login to vote this up!