3:37 PM on 05.05.2010 (server time)    0
See, I have a problem with Jim Sterling's reviews. The problem is that HE'S the one reviewing the games. Don't get me wrong, he has a right to an opinion, but his recent review of Alan Wake made me wonder why he's even reviewing games in general.

Take, for example, these posts by the member twelvefiftyone:

lmao, the fat moron can't go an entire review for a game on a certain console, WITHOUT mentioning the rival console's supposed "equivalent"(which is the only reason this fuckin' retard could have had to even mention or allude to heavy rain), and people give him praise for it.

and this is all coming from someone who owns both a PS3 and a 360. Someone who planned on buying Alan Wake BEFORE reading this jackasses' opinion on the matter. Someone who would take two games such as Heavy Rain and Alan Wake for what they were, and enjoy them for that, alone. Not type out a lengthy fucking review for one, just to end it with a jab at some other game that has absolutely nothing to do with the fucking review in the first place.

You really are a cancer to DTOID, Jim. You're retardation shows no limits. You're not a gamer, you're just a gigantic douche bag.

Oh, and: Hey! They made Secret Window into a video game!

he mentioned PS3 in high regards, jackass. you're about 5 years too late to the console wars which have ended. get a life, you fucking ass.

i'm everything that's still fine and dandy with the interwebs. i call it like see it, and i see jim sterling as a pompous jackass that can't garnish attention on his ability to use a thesaurus and keyboard alone. get fucked.

@rammstein is a lame, and old fade,

And what the fucks the point of blasting me? I'm just pointing shit out that you're all too blind to realize.

It has absolutely nothing to do with fanboydom. The main reason I bought a 360 was for Secret Window The Video Game. I'm a really big fan of Remedy. I knew this game was gonna be the shit. I don't NEED a fagggot on a blog telling me what to buy.

But the fact is, either you post on the DTOID forums and you think you're getting somewhere by defending one of the bloggers- or you truly are fucking retarded if you can't see how fucking lame Jim Sterling is.

Does Chester have to do this kind of shit to get attention? Fuck no. He does his job, and if he wants to be colorful, he doesn't throw in flame bait to hide the fct he couldn't type a relevant paragraph if Jesus was sitting in front of him, recounting his life's fucking story.

Does Samit blatantly use fanboy tactics when ranting about sports games? Fuck no. If a games better than the other one, he lets you know. He doesn't take cheap shots to bump up his replies. Dare I say, he acts sorta professional.

Neither of those two guys, nor 90% of the DTOID staff take themselves as seriously as this clown Sterling does. He's a gigantic douche bag with prosthetic limbs pounding on a keyboard.

And you all look like even bigger morons for praising him for taking fanboy shots.

Yet, let us all remember, that no Fanboy Friday has ever taken into account the stupid shit that permeates through DTOID's own blogger's fingers. And that shit is RIPE. You could do an entire piece on the stupid shit Sterling has typed on the internet, JUST this year alone!

Though the blogger in question makes typos in 3-5 posts, 2-5 posts he'll make typos in the fucking header.

You sir, render yourself irrelevant. And a jackass. Double whammy.

How is it confusion, you jackass?

Go back and read the post, or any post of mine. I use the possessive form and contraction on a regular basis, CORRECTLY.

Therefore it's a fucking typo. Especially considering I'm not gonna take the time to proof read a reply of my own on a site that lets fucking douche nozzles like Jim Sterling get away with being a jackass, while making a profit.

Learn to live with the fact that your only argument against me was a typo I made because I type way too fucking fast, and the argument was, is, and will forever be invalid, because you're an asshole troll.

It's a fucking typo. I fucked up a word by hitting two other keys, instead of just one, or none at all. Give it up.

And it's not the fact that he did it one line of text. It's the fact that he had a good review going, and then he fucked it up by being himself, and he gets praise for it in the fucking reply section.

Very much a necessity, for me to call the asshole out on it.

The fuck are you rambling about? The teacher would conduct themselves the exact same way on each MISTAKE. Ones not better than the other, jackass. It's still a mistake, and it's still not proofreading. Jesus, you're an idiot.

YOU can't argue shit, because you have nothing to argue, as evidenced by you spotting a typo and harping on and on about it. Don't tell me I can't argue my point, I've yet to see one rationale explanation as to why it's ok for Sterling to propagate his own perceived "PS3 bias" for his own attention. He can't just type out a relevant review, he's gotta go the other route, and forgo a decent piece instead to be an asshole.

And he's not joking about it. He's dead fucking serious. Jokes get old, but a fanboy such as himself NEVER gets tired of the joke. To negate what he does on a weekly basis as a "joke", is a fucking travesty. Idiotic assumptions like that is why he thinks it's ok to keep doing it. He's mentally disabled. He doesn't understand he has a problem, lol

He takes this shit far too seriously. I'm just pointing it out, and am now being attacked for it.

i said nothing about jim being biased. i said he propagates his own bullshit to get attention, because he's never had an original thought in his entire life.

he had a good review, and then he ruined it by being himself- as he does 100% of the time.

live with the fact that you're supporting a fucking moron.

OKAY BACK TO ME

Hope you didn't read all of that at once.

Now, this is the problem I have with Jim Sterling's reviews. Not him, or what he writes. Rather, the amount of people so damn autistic I'm ashamed that I didn't breathe fast enough when I was born to prevent me from being within the same realm of stupidity as they reside in.

So, how do we fix this problem? Simple. 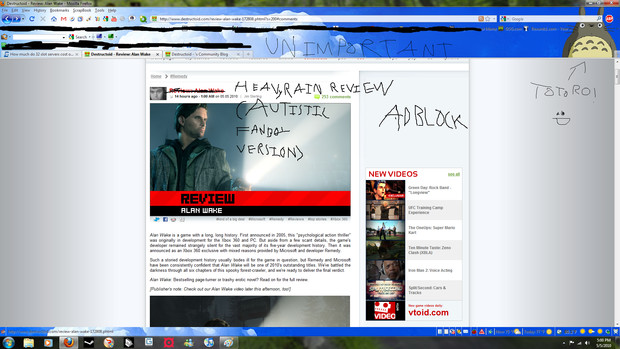 Jim can keep reviewing, autistic fanboys feel better about themselves, I keep looking at Totoro!

Ingenious.
#Community
Login to vote this up!