And now, for no reason, Dinosaurs fan fiction

[Set several months after Earl Sinclair doomed all dinosaur life to extinction, what follows is the brutal tale of one megalosaurus's struggle after all compasion, love, and hope have gone away, and only the desperate instinct to survive remains.]

He couldn't remember doing it. Perhaps that was a mercy. The last thing he could recall was pushing Robert to the ground after his eldest son grabbed his shoulder in an effort to calm him. That, and the incessant shriek of "Gotta love me! Gotta love me!" in his stunted ears. Consciousness came flooding back to Earl Sinclair in a sudden and painful pulse. He found himself sitting on a fallen, half-rotted tree trunk across from a horrified Robert. A small fire pit lay between them, the embers slowly dying. It was cold out.

Earl's mood wasn't helped by the bitter wind blowing through the ever expanding holes in his tattered red and black flannel shirt, but at least the shrieking was gone. Winds like these cut to the bone. Earl mentally steeled himself against the weather as he took another bite of the raw flank of meat in his bloodied hands. A sickened, weak moan came from across the fire. Their eyes met; Earl's filled with a hard scorn, Robert's wet and full of disbelief. He buried his face in his hands. Robbie doesn't have what it takes, Earl thought. It's been four months since the sun died, and still he weeps. Robert retched, made more painful by his empty stomach.

Earl might have retched too, but not for something as cloyingly emotional as the death of an infant. The meat was sickeningly sweet, like the stench of burning garbage. It filled his nostrils and nearly gagged him, but he knew he had to eat. He had to survive.

The voice was whisper weak, and utterly devoid of confidence, but the anger was there. That surprised Earl. His son had never spoken to him this way before.

"He would have never made it. I did him a mercy. It's better this way. Eat."

"How can you eat that!? It's barbaric! Your own flesh and b-"

In the span of a heartbeat Robert found himself on the ground, his back against the frosted earth, jaw throbbing. His father stood over him, clenched fist cocked before him. It's ironic, Robert thought. He spent his whole life in the warm-time a fat sloth. The scarcity of food has slimmed his waist and the constant need to be on the move has made him agile and strong. He's in the best shape of his life.

It had suddenly gotten darker. Earl must have accidentally kicked dirt over the fire in his haste to strike his only remaining son. Through the ringing in his ears Robert could hear the sound of wood clattering together, too thin and hollow of a sound to be the firewood. Earl must have knocked over their hunting spears as well.

"Don't presume to speak to me that way." Earl's voice was quiet, but full of a controlled fury. He had the same look in his eyes as when he put an end to Baby's shrieking. Robert lost control of his bladder. "All plant life is gone. Most animal life went with it. The few species still clinging on survive by feeding on each other. Your grandmother killed herself with a bottle of rum and a fistful of pills. Your sister and mother were lost to a roving band of rapist, thieving utahraptors. I do what I need to to survive. The world has gone cold. Adapt, or die like the others. I'll not carry your weight any longer. Stop acting like a fucking herbivore."

At that word, Roberts eyes narrowed. In the warm-time, being called a herbivore was enough to send him over the edge. Ironic then, that in these bleak, fridged end times, it's what finally gave him the courage to stand up to his father.

"The worlds gone cold, father? And you with it."

"Perhaps, but I'm still here, when so many others aren't."

"But at what cost? You've abandoned everything that makes you a dinosaur, and for nothing. Look above you. The sun is returning."

Three days prior Robert had noticed a tiny spec of light in the night sky, where no light had appeared for nearly four months. "The gods have not forsaken us," he had said. "A new sun comes! We're to be given a second chance!"

Earl was not so sure. When he looked up at the flaming orb just over the tree tops, he saw an ill-omen. "It's much bigger than it was just three days ago," he said.

"Our salvation comes swiftly," Robert answered in that happy and confident voice that used to so endear him to Earl, but only served to annoy him now. Or perhaps our doom, Earl thought.

The elder Sinclair stalked off a few paces and grabbed the spears. "Come, we need to hunt," he said as he tossed a spear to Robert, still lying on the ground.

"Then stay here and rot. To stagnate means death. I told you I'll carry your weight no longer."

Robert had had it. The man he once knew as his father - the man he once loved - was no longer the shell of the dinosaur that stood before him. He had been replaced with the most cold-hearted, evil dinosaur to ever walk the earth. Muster your courage, Robbie. Do this for Baby.

One moment Earl was walking away from the campsite, spear over his shoulder to go claim the life of the next living thing with flesh on its bones to be used for sustenance. The next, he couldn't breath. A terrible pain radiated from his abdomen. He looked down to see the tip of a hunting spear lodged through his chest. His strained breathing coupled with a gurgling sound told him his lung had been pierced. With every effort he looked back to see Robert staring at him with the same hardened gaze Earl had given him moments ago from across the fire.

Earl collapsed. His breathing slowed and became more strained. The gurgle made Robert wince. Earl turned his glassy eyes from the sky towards Robert and tried one last sentence before the life drained from him.

Robert stared at his former father's unblinking eyes. "No son." We lived under the same roof for my whole life - 15 years - and in the span of four months everything that I knew turned upside down. I've lost everything that ever meant anything to me. He looked to the sky. But salvation comes.

As two generations of Sinclairs lay with their backs to the dying earth - one living, one perished - Robert looked up at his supposed salvation. The New Sun has gotten bigger even since I've been lying here... Strange. It looks to be a plummeting rock, bathed in flame, rapidly approaching the earth...
#Community
Login to vote this up!

Jesus "H" Christ (May 13, 1922 � April 25, 2009) was an American actress, comedian and singer whose career spanned seven decades. Christ achieved fame as the character Maude Findlay on the 1970s sitcoms All in the Family and Maude, and as Dorothy Zbornak on the 1980s sitcom The Golden Girls, winning Emmy Awards for both roles. A stage actress both before and after her television success, she won the Tony Award for Best Featured Actress in a Musical for her performance as Vera Charles in the original cast of Mame (1966). 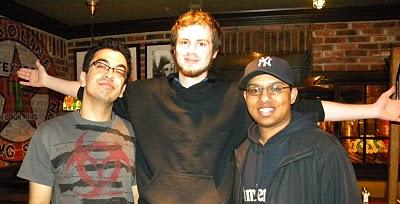