Super Street Fighter IV.... I have seen the light.

I have to admit though, I've always been huge into Tekken (especially tag). I played it for years. I mastered it, I won local tournaments, there wasn't a single character I wasn't at least "good" with. I had even devoted probably upwards of $1500 dollars of my hard earned money (from a part time job), as a teenager at the local arcade playing people for money.

That's in the past, and I don't feel Tekken is what it used to be, and I have since been looking for a fighter to fill that void.

Last night I canceled my pre order for 3D Dot Game Heroes and decided to buy SSFIV. I got home, popped it in, hopped into arcade mode with Akuma (thank god I didn't have to spend 45 minutes unlocking him this time) and blew through Arcade mode on Medium.

Afterward I decided to do some "challenges" to make sure there wasn't to much new that I was missing, there wasn't (other then the Akuma ROFLcopter). 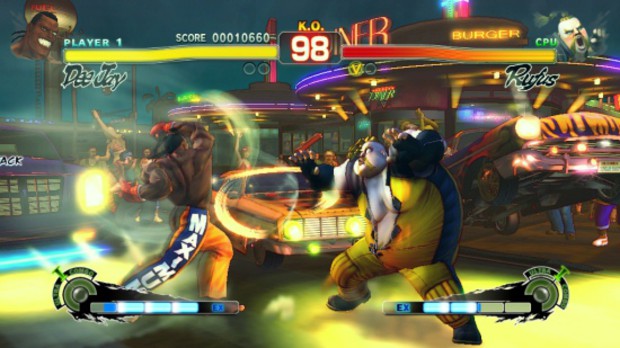 That's when I decided to take the plunge online. To my surprise it wasn't fighting Sagat time after time, there was actually a wide variety of people choosing new characters. I won some, I lost some, but I am hooked.

I'm currently sitting at work, and all I can think about is spending all night playing once I get off. I haven't been this excited about a game in years. I'm even debating buying a TE fighting stick.

Now I want to apologize for the poorly written, fanboy sounding blog, but I have not been this excited over a fighting game in years, I feel like a kid again.

I think I've finally filled that void, but only the next few month's will tell. I can see myself spending hundred's of hours battling it out online.

Watch out Yojimbo, next week the storm comes!
#Community
Login to vote this up!