The Curious Conundrum Of Online Douchery 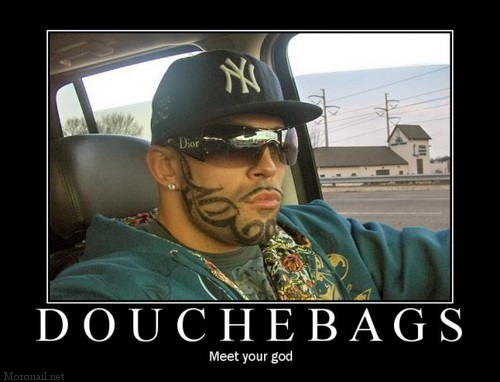 I don't know what it is about the internet that makes people show their alpha-base nature.

I guess it has to do with the shell of anonymity that encapsulates us all when going online, a shield made of fake names and pictures that represent some sort of aspiration or side of your real self. It allows us to reveal our most honest nature unabashedly, without fear of repercussion or consequence because, well, who's going to be able to do anything about it? It's not like they know your real name, it's not like they know where you live right down to the mailbox and two lopsided trees in the front yard. Why would someone be afraid of something that can't touch them, and if that is the case, why would they not act like an incorrigible asshat, especially if it's more "fun" that way?

This principle, I've found, is no more prevalent and pervasive than in online services on videogame consoles. I seem to find some good folks every once in awhile, and they're not that few and far between in the grander scheme of things. However, just like bad experiences in a restaurant, the repulsives seem to stick in the mind far more than the decent examples of humanity online, whether it's on Live or PSN. It's not like everyone's a rampaging tan/laundry/douche fanatic with a thick northeastern accent talking about "how many sisters have you fucked, you dumb redneck," but experiences like that really ruin the flavor of the entire soup, you know? It's not like I don't talk smack online, but I do try to keep it somewhat civil - there's a not-too-fine-line that you can tread that straddles "saint" and "Satan." You can be a bit of a jerk and still have fun with it. But that line, just like all other lines, can be and most definitely will be crossed anywhere along the way. When that line is crossed, it's a sad look at how many of the population put that attitude out there into the world so willingly and without remorse or even consideration for who may be on the other side of things.

Sure, I'm a southern-born-and-bred American man, but rest assured I'm no "dumb redneck." I'm a fairly articulate 27-year-old Floridian with an IQ hovering around the 170 mark, and that's not a horn I go around blowing at full volume. That's something I largely keep to myself, because I think that one's true character has a tendency to speak for itself without much provocation. This is no less true for the unsavory characters on the planet I may come into contact with, because from their actions, whether physical or auditory, they give away what they're made of inside. It's the little tells - like conversations that can't go 6.37 seconds without dropping the word "fuck" in order to express themselves, that make these avatars of the "lowest common denominator" club as easy to spot as a yellow elephant in a daycare playground. That's not to say that I'm not a fan of dropping the f-bomb, as that word gets a lot of respect from me for being the most utilitarian phrase in the entirety of the English language. But there comes a time where you have to put that aside, and actually pick up a book or two, maybe you'll even learn something about expressing yourself as something that's not a caricature of the culture that spawned you. MTV spend a hell of a lot of money doing a good enough job of that already, and here these dudes (and I use the term lightly) seem willing to do that job for the low, low cost of free.

I never thought I'd do this, but I have to quote a comedian loved by "dumb rednecks" the world over.
"You just can't fix stupid." - Ron White


And that, as they say, is that. You could choose to beat them, or join them. Joining them in creatine-fueled hostility would be really easy to do...but kicking the ever-eternal soulshit out of all of those pricks for daring to waste the air that I breathe with their incessant prattling was so much more satisfying. I hope you guys are reading this...but the likelihood of that is pretty slim. You'd have to learn how to read first, fuckwits. Oh, and Dr. Honda says hello. Bitches. >XoD