E for Effort: Dr. Samit or: How I Learned to Stop Worrying and Love SPORTS! 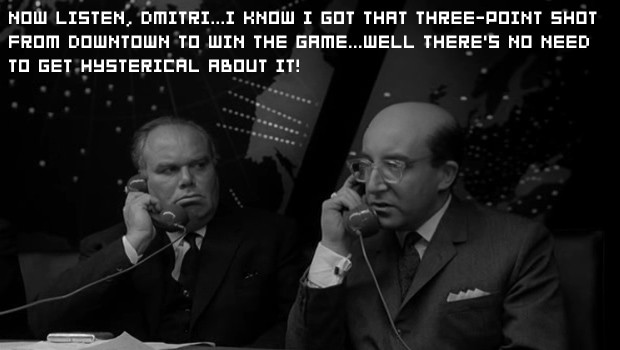 A final thing I know sports games have always done well is the ease of which multiplayer fits in with the genre. If you go all the way back, the first video game to become popular, Pong, was technically a sports game, and competitive multiplayer was at the core of the game. So, from the very beginning of video games, multiplayer and sports have been closely linked. This is natural considering that sports themselves are humanity's (relatively) non-violent outlets for our natural instinct to compete with one another. Fighting games are really the only other genre where multiplayer is required to be part of the basic design of the game. After all, in both genres you are either playing against a human opponent or against the CPU as a replacement for a human opponent. Unlike fighting games though, sports games rarely have to force the "regular" game concept of narrative to frame the competitive gameplay. Instead of creating immersion through plot or characters, a sport game relies on pulling the player into competition; the desire to "win" is critical, be it on the scale of a single match with a friend or over a stat-filled season against the CPU.

I had some trouble writing this article. Trying to cover an entire genre was probably a little too big to tackle in one go. If I can bring one common thing out of all this writing, it is that sports games really aren't that different from any other genre of gaming. Many games share a focus on detail (graphical and statistical), perspective and competition, and almost all developers have a tendency towards iterative evolution. So, really, there's no reason to hate sports games as being somehow detractive from more "mainstream" games (whatever that means...). They're following the same basic trends of all games (competition, recreating fantasies, etc.), and it's just that they are skinned with sports, which not everyone likes to either play or watch. So, if you like a particular sport or sports (like my dad and hockey), there's a good chance you'll like playing sports games. If you don't, you might not like playing them, but you should at least respect the basic characteristics that the genre does well and those it shares with video games in general.
#Community    #OpinionEditorial
Login to vote this up!