An (informal) invitation to the wedding of Burch 'n Davis 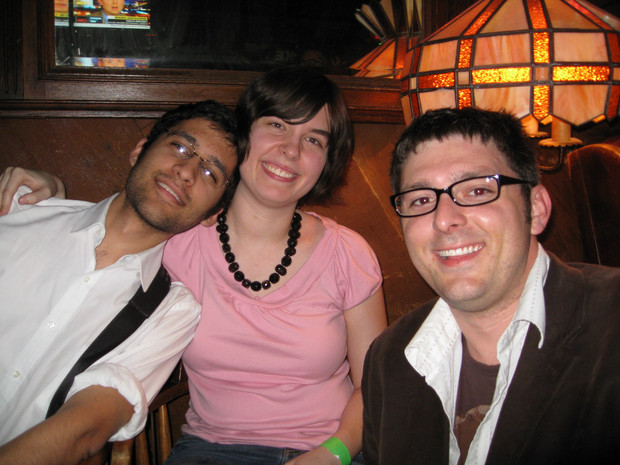 But with the 700+ comments and all of the messages we recieved through email, the forums, Twitter, Facebook, and so on, I'm sure most of you already know that yesterday, Anthony Burch proposed to me and I said yes! This c-blog is an informal invitation to the "ceremony" (with both of us being non-religious, I'm not sure how ceremonial it will be), but first, I want to say my thanks to you all.

Like Anthony, I would not have any of the wonderful things I have right now if it were not for Niero, the rest of the Dtoid staff, and the community. As a humble little country girl, I would have never dreamed I would be where I am now. Destructoid has been just wonderful to me, and there's no way that I could ever give back enough. I'm still going to be a part of the site, and though my presence on the frontpage has dwindled since Once Upon a Pixel began (it takes up a lot of my time ;o;), I still lurk the frontpage, c-blogs and forums constantly. I love you guys, and that's why our wedding is open to any of you who wants to/can be there.

I have to say a special thank you to honorary Dtoider Aaron Linde. Almost three years ago now, I reconnected with him; we'd previously been old Livejournal friends way back when I was still in high school. He became like a brother to me during some really hard times. He introduced me to Destructoid, the site he had recently worked for (he had already started at Shacknews by that time) and I knew right away that I wanted to be a part of it. He also introduced me to Anthony. He's the person who set everything in motion for me, one of my closest friends, and just the best guy you could ever hope to know.

Now, let's get to the good stuff! Many of you have expressed a desire to come see us get hitched. We're still in the planning stages, but we kinda need to get a head count before we settle on a venue. All we know at this point is that

1. The wedding will take place in or around our residence in Phoenix, Arizona.

2. It will take place on a Saturday in early June (probably the 5th, but this is subject to change)

If you would be able to make it and want to come, please let me know in the comments so that we can plan accordingly!

Again, thank you for all of the kind words and well-wishes to Anthony and I! We hope you can make it!

(tagged as a NARP, even though there is an apparent reason for this party...)

PS I AM NOT HIS SISTER WE ARE TWO DIFFERENT PEOPLE
#Community    #GAMENARPS!
Login to vote this up!

Awesome drawing of me by Jack Maverick!

Hi! My name is Ashley. I like video games, and to write and draw. Sometimes I combine the three. I have a huge knowledge of video game trivia and pop culture trivia in general, and I like to overanalyze things both for fun and for your entertainment.

My favorite game genres are puzzles, platformers, and scrolling shooters. I also really enjoy Mario Kart. But I don't like to limit myself, so I'll give anything a go at least once.

Even though my first console was an NES, I grew up mostly on the Genesis. Much of my childhood was spent playing Sonic 2 multiplayer by myself. I would switch the controller after every round and play both characters evenly so that it would always end in a tie.

I am a little shy, so you may have to prod me, but I would love to be your newest friend!

Also, ducks - Duck is now living with a zookeeper in Alabama who can supply him with a bigger swimming area than a bathtub. He is in a better place, free of Zappers and laughing dogs.