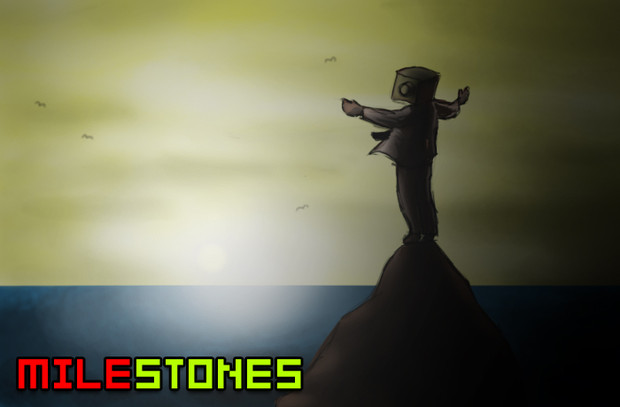 You step out into the open air of the world. Monolithic buildings seem to stretch to the stars, a plane swims by overhead, the human race lives. Across the street you see an old woman screaming for help as she pulls desperately at her purse that a hooded man is trying to take. In front of the corner liquor store you see a man, staggering, holding his stomach; you're unsure of whether he is drunk or if he had been shot. A businessman hurries across the street, only to be struck by a car�the car does not pause nor falter, but instead zooms away, leaving the man to stare up into the blinding sun. Our minds are faulty, we are small, the human race lives.

In my 22 years upon this planet, I've seen a world covered in darkness and agony and fear. I've seen more than some people could see in 40 years. A lot of my life was spent detesting the bloated sacks of flesh around me who would worship MacDonalds and Starbucks if they could. I hated them because they were immoral, selfish, greedy. Everyone and everything seemed worthless to me, just a massive pile of sentient garbage and filth.

As years progressed and I felt the weight of the world growing heavier and heavier, I came to the realization that, despite our casualties and self-destruction, despite our failures and greed, despite that tiny voice in the back of our heads telling us that we are worthless (which is the voice that is trying to destroy this planet), the human race is magnificent. The human race lives.

The old woman across the street lets go of her purse. What good is $100 when she can go home to a loving family who is worth more than the most expensive diamond? The staggering man calls for a taxi and gets taken to the hospital for the bullet wound. Why wallow in self-misery when you can pull yourself out from the chasm through sheer willpower alone? The broken man at the crosswalk is surrounded by a crowd of people, some crying, some calling the police, some crouched beside him in comfort. Why leave a piece of the human race to die?

The darkness is thick and tangible, yes, but there is always a speck of light. If we try hard enough, if we're strong enough to not let our minds fall prey to misfortune and fear, then we can pull at that light and make it larger. And it happens time and time again, never ceasing to amaze my tired, disgruntled mind. A wound is healed, lovers embrace under a night sky, a child dreams of simple and yet important things, the red button isn't pressed. Against all odds, wading through that tangible darkness, the human race prevails, was meant to prevail.

Destructoid is evidence of that.

I came to this site in late January of this year. Today only marks nearly 3 months of my existence here. Who am I? A nobody, a man without face nor presence. I could depart and no one would watch me go. And yet, here I am with tears rolling down my face. Why is that? What makes this site so much more different than any other site I've been to, where the simple fact that it is alive and kicking can send a man nearly fed up with the world to tears? There is power here. It's more than just a video game website.

Everything here feels like one large mansion, from the newest of new members all the way up to the boss Niero himself. We fight, we bicker, we complain, something Jim or Anthony said gets someone riled up. And yet we prevail, gathering around a fire at the end of the day to sing camp songs and make dick jokes.

I find it interesting how small occurrences and happenings could bring about my stumbling upon this extraordinary site. And let's face it, that is how the majority of the users came here. It's like opening the refrigerator and finding the Holy Grail, or sneezing into a tissue and seeing the meaning of the universe displayed within the snot. Okay, maybe the latter comparison is a bit off, but you understand what I'm saying.

Every day, when I sign onto Destructoid, whether it's the main site or the forums, I can literally hear the gears of the place turning. It's hard to put into words, the feeling I get, but I'll try. The planet Earth spins at around 1,000 miles an hour, while revolving around the sun at about 67,000 miles an hour. These spins and revolutions create time, seasons, and let us exist. Ultimately they are, as we understand them now, what makes up our existence. This is akin to Destructoid. There is an underlying heart-beat to the site, a gentle thump-thumping, that brings each day to us. Whether Niero sacrificed his soul to give the site a life force of its own or if it's all based upon the members contributing a piece of themselves daily, I can't tell. But whatever it is, it's keeping me here. It's keeping us all here.

I don't know all of you, hell I barely know any of you, but goddammit I love you. I would hug you if I weren't just words on your screen. Humans, oh humans! We're so ugly and yet so beautiful, each and everyone of us. Destructoid brings that fact to light, and that's why these tears are on my face. That's why I smile happily when Jim Sterling posts one of his magnificent articles that angers so many people. That's why I frequent the forums. That's why I became depressed when Topher Cantler and Anthony Burch left the staff. That's why I became so happy when Anthony Burch proposed to Ashley Davis. Subtle things and simple things are important things.

These subtle and simple things are what makes us human. They are more powerful than the pain and agony we see around us. They will never stray, never tire, and this is why we will always prevail in the end. It's in our genetics.

I mark this day as a milestone. Thank you for giving a tired mind some more strength, Destructoid.