My arcade stick project - the finale 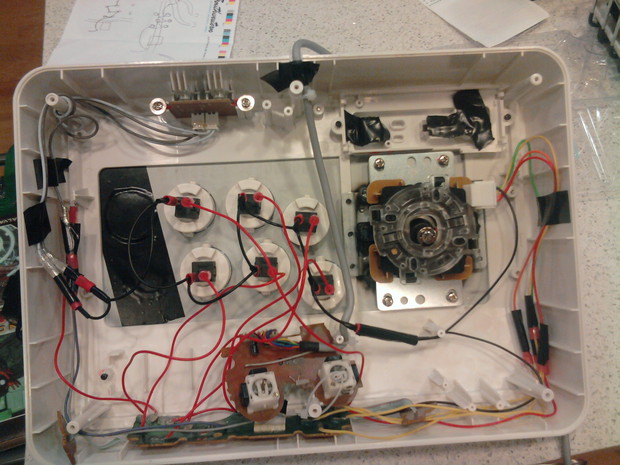 The interior is not that clean but it's functional. I spent a few hours working on the common ground daisy chain, figuring out how to wire in the Sanwa JLF and which wires do what. My wife and volt meter helped out with that. Once the wiring was finished, I tested on my PS2 before reattaching the base plate. Once that was done, I finished assembling and tested again only to find that the circle button stopped working. After a bit of testing, I switched the ground and lead and the button worked again. I then tested on all of my systems using various adapters and the stick works like a charm.

Thoughts on the process
I went into this project both excited and nervous. I'm the type of person who loves obtaining knowledge about the devices I interact with; the type who sees a system restore disc as the freedom to mess around with a computer until I figure out what I want to know and/or the OS needs to be restored. I adore that sort of hands on knowledge.

In the process of modding this stick, I spent a lot of time and money. Some of that could have been avoided but I went into this full-bore and some of the ideas I had did not work. I would not call the money wasted as I learned a lot in the process. I wanted a PS2 stick so that I could have 1 stick that would be compatible with PS2, PS3, Gamecube, Wii and Dreamcast. Those are all of the systems I own. I initially started with the MC Cthulhu but found that soldering single stranded extremely small wiring to be harder than anticipated. When I hit this problem, I decided to go the pad hacking route. This time I did go with a pre-fabricated solution from http://www.gdlkgame.com. The $35 hacked pad made the second attempt at the internals much easier. If I ever decide to do another stick, I may attempt the pad hacking myself but this project was way over budget both monetarily and in the time it took to complete.

Another setback was the lamilabel from Kinko's of the first design. I tried a vinyl decal but it didn't work and then went back to a lamilabel-type applique which worked better than either of the other approaches. When I redesigned the art, I decided to go all Samwa on the buttons and ordered the white rimmed buttons from http://Akihabarashop.jp. Luckily, the pad hacked PCB and buttons arrived on the same day which helped me to finally wrap up this project.

Advice
If you have any interest in this sort of project, you'll need some specific tools. If you have these before you start the project, life will be much easier.

Wire stripper/cutter - RadioShack sells one for $6 that works for 30-20 AWG wire. It's easy to use and cheap.

Voltmeter with continuity testing ability - the basic $16 model at RadioShack is all you need. This is a useful tool to have in general.

Crimpers - I used needle nose pliers to crimp the quick disconnects. If you can find a special tool for this, use it.

The most important advice I can give you is to be patient. When you first start out, the project will seem impossible. Then you'll get comfortable and things will start to go smoothly. At that point you usually hit a roadblock of some sort, there is a ton of information out there; all you have to do is find it. Always keep spare parts around, you never know when you'll need it. I completely wrecked a Mad Catz joystick so that I could understand exactly how joysticks work. As I stated in my last post, sometimes you have to destroy shit to learn how something works.

The completion of this process was pretty amazing. When all of the problems were overcome and the troubleshooting was complete, I looked down at this little arcade stick and smiled knowing that this was created through my effort and imagination. Sure I didn't build the case or hack the pad myself, but I designed the art, collected the parts and figured out how to make all of the pieces work together. There's something beautiful about that.
#Community
Login to vote this up!