1:10 PM on 04.23.2010 (server time)    0
Well I love games, as this is obvious. I prolly spend more then I should on games at that. You know its just hard not to want to go into a video game store. Its even harder to walk out without a game, or two... or three. And yet, there is a shelf with games on it, half of which I have not even played. Because they were games my boyfriend had bought before we got together, and I was already into other games I owned.

Anyways, my boyfriend had bought me Lost Planet not to long ago. I kept forgeting the game existed and I wanted to play it. So I played it a few days ago. Played it for about 2 hours and got bored of it. I felt bad, I was really interested in this game. Maybe soon enough I will go back to it, but I guess I wasn't in the mood for a linear shooter.

So I decided just to try to play the games off the shelf in alphabetical order. Bioshock is the first unplayed game on the shelf. I know, you are thinking, "what kind of gamer I am, wtf is wrong with me?'". I'm not sure, but I think a part of me avoided the game cause its my boyfriend's, ex-girlfriend's game... And it didn't seem to interesting to me at the time.

Nonetheless, I plan on playing this game to the end. I have already played it for a couple hours today, and I really enjoyed what there was... It reminds me of Metroid Prime just a bit. Upgrades to get plasma powers shooting out of your arm, and running around in a large map. But thats really it though. I hope my Bioshocking goes well. When I done Brutal Legend is next in line... But Mario Galaxy 2 comes out soon... And Red Dead Redemption. Well untill then, I guess I'll be playing catchup on good games I've missed. 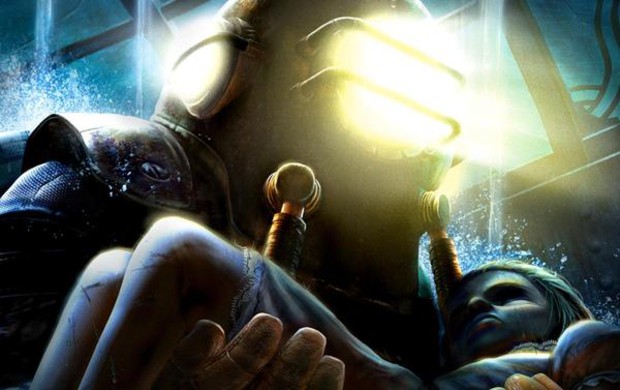