3:11 AM on 04.13.2010 (server time)    0
After finishing off a season of a popular television show, I decide to contemplate endings for awhile. I tie it into video games so I don't feel like I'm totally wasting my time. I don't know how to end this intro.

SPOILER WARNING! I have a lot of major spoilers for the first season of Mad Men and both Mass Effect games in this post. If you're working through any of these things, you may want to skip this entire thing. Everything is unmarked after this point

Have you ever finished a book, walked out of a movie, completed a game, or finished off a TV series and suddenly you were filled with a sense of completion? Perhaps, as the credits roll, you feel satisfied, but if you were told there was more, you'd be happy.

I'm sure you've all experienced the opposite, too. Maybe you're watching a single movie in a series, and the only thing the ending accomplishes is setting up for another sequel; one that you'll have to wait at least a year to see, maybe even longer. If you followed Stephen King's "The Dark Tower" series, you probably know exactly what I'm talking about. Endings that serve the long-term, but not the short term.

Or maybe it was something that came to a complete stop, but just didn't deliver that particular thing that you wanted so you could move on from this show, or whatever else. Maybe you don't even know what that thing is, but you know what you saw wasn't it. Seinfeld fans certainly know the feeling, and fans of The Sopranos probably can relate to this. 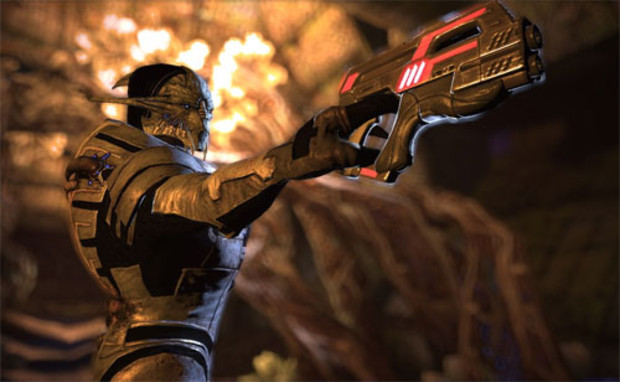 You would undo my work. You would doom our entire civilization to complete annihilation, and for that, you must die. - Saren Arterius

Hell, look at both Mass Effect games. The first game gives you Saren to chase around, and you end up defeating him at the end of the game. Shortly before that, though, you figure out that Saren isn't the real evil at work, and with all of the damage done to the Citadel, it's obvious that you have work ahead of you. Still, you got your conclusion to that major act of the story.

Again, we got this same sense of satisfaction with Mass Effect 2. Your main enemy was and is clear right from the start, although the Collectors prove to add more to the mystery. However, you get the satisfaction of blowing up a giant Reaper, and eliminating a Collector base (or choosing to deliver it to the Illusive Man, if you so please). Again, though, it's obvious that there's more work ahead. Both of these games had such satisfying endings that also had me going, "Alright, where the hell's the sequel?" Kudos to Bioware, they really know how to end a game. It'll almost be a shame that Star Wars: The Old Republic won't really be able to have any sort of real ending.

Why is it that so many writers (in any walk of life) feel the need to wave a carrot on a stick in front of their audience? I was having a discussion with a friend about Lost (another show coming up to a big ending, one that people flat out assume will be disappointing, just because of lofty expectations), and she argued that these unsatisfying filler episodes I've seen this season are necessary to set up the bigger moment. I contended that on both a micro (each episode) and macro (each season) level, I should be entertained. "Filler" is a word that needs to be done away with.

Certainly, it's much easier to just stretch out a few minutes of excitement into hours upon hours, but this is a lazy method of writing. Deadlines always make things more complicated, I'm certainly aware of that (and am angry at myself for forgetting to update this blog yesterday), but this shouldn't be at the expense of your audience. Don't jerk us around with sequel setup, especially if you've already made clear your plans for a trilogy, or whatever else.

This is how Shenmue 2 happens, and you're damn right that I'm still bitter. I don't even care that the games weren't that good in hindsight. I have absolutely no closure to that story, and will likely never see that closure. With studios popping up and getting shut down all the time, and copyright law being what it is, it's nothing short of cruel to do that to your audience. Just like in any other day and age, you have to be prepared for the worst at all times, and that includes how you manage writing your works of fiction.

So please, writers and aspiring writers: prepare your story in a way that it's always entertaining. When you're closing an act - even if it isn't the final act - don't present it in a way that creates no value for your audience besides a reason to tune in next week, season, year, or whatever schedule you're on. It takes extra work, sure, but doing it this way will guarantee that the amount of unhappy groans over your ending will be significantly less. Write like there's no tomorrow - for all you know, there won't be.
#Community    #Rants
Login to vote this up!