1:00 PM on 04.12.2010 (server time)    0
Red Steel, Assassin's Creed, No More Heroes. You know the effort and thought of doing something great is there, but the lack of polish and the presence of repetitiveness seems to always wiggle forth. But its hard to complain about No More Heroes and Red Steel 2(I won't talk about the first Red Steel because there was nothing to like) cause they turned out to be good games. So I will complain about Assassin's Creed instead. Ubisoft pushing original ideas forward, but failing to make this idea as good as it could have been. So....

Despite my failed efforts to finish this game because of how dreadfull it is... I still think about going back and finishing this astounding piece of crap. Now I know some out there might hate me for saying that, but I believe in honesty no matter. And I never once thought Assassin's Creed, was actually a bad thing or a bad game.

It was refreshing, but for about the first hour only. Behold, it was a great sight to see, it made you go "holy shit, this is amazing.", for that first hour. You could tell Ubisoft tried to put some original effort in this, and you could tell they wanted to make something to love. They realized games are just so typical, and its so rare a new IP comes out. So what else to do but make a new IP? Which apparently means toning Prince of Persia down to a realisticly boring extreme. And none of this is happening now, but in your past, and that is not very usefull to this dull, pointless, storyline.

Yet in all of this, I still continued to play. Not for the sake of beating it, not for the sake of destroying this beast, but for the sake, of dicking around. Yes, dicking around. Assassin's Creed has to be one of the funniest games to dick around is. Missions getting uber repetitive? Cutsences bogglingly your mind because of how dull and boring they are? Well my son, just dick around! Climb buildings, kill innocent people, get into sword fights, hide in some hay, find some flags, without worrying about getting anything boring and important done. Its rather entertaining to see the way your assassin can move, and what he can do. Its hard to take this game seriously though, so why not just laugh at how funny this game actually is? And while you do this you can enjoy how detailed, and releastic, this world is before the dullness smacks you.

Its clear effort was put into this game, and a decent amount at that. And despite how I hate it, it set a high and impressive visual standard for the new generation of gaming. When a game is this painfully realistic, what else is there to admire? It will always get a F for Fail, but I can't ignore it deserves an E for Effort. 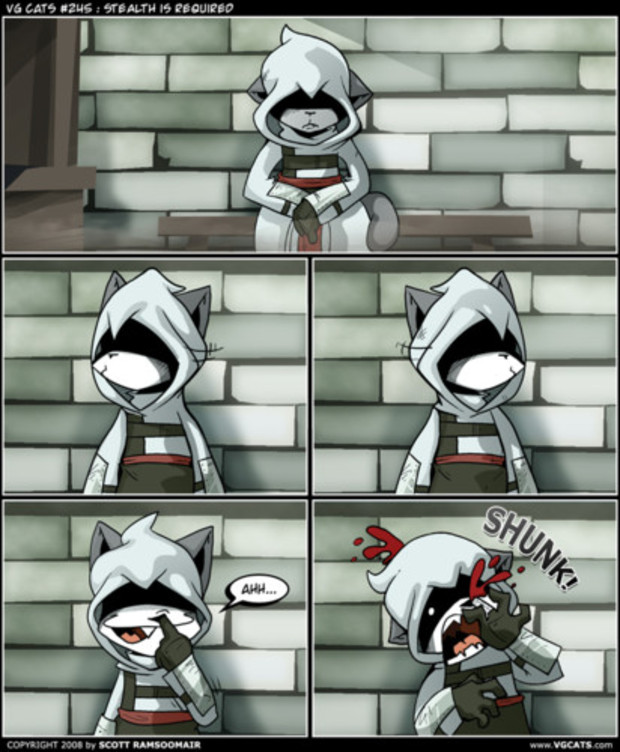