3:07 AM on 04.06.2010 (server time)    0
Hitting the opposite end from yesterday, today I'm going to discuss my first entry into a realm that once seemed like a Forbidden Zone to me: Dungeons and Dragons. I'm scared already. Hold me? 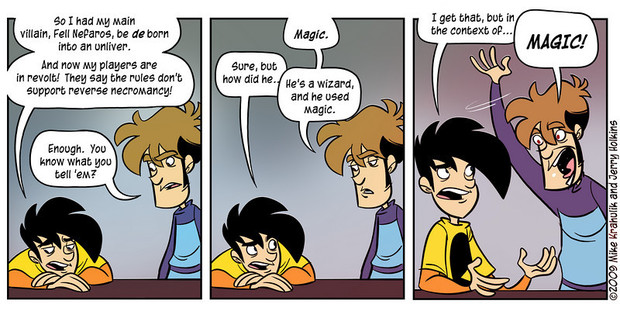 (Permalink. If you caught this right when I published the image was messed up. Looks like uploading it direct fixed the issue.)

Yup. Dungeons and Dragons. For someone who has been playing video games since childhood, someone who went through a Magic: the Gathering phase, and someone who welcomes nearly any hobby you may have, D&D was that one barrier I was actually afraid to cross.

"That's for the super nerds," I told myself. "I've got better things to do than buy a million dice and make character sheets." As anyone who knows me will tell you, that's a blatant lie. I always have too much time on my hands.

Of course, I didn't exactly throw up a LFG flag to look for a group - my group found me. A couple of my co-workers were standing next to my desk talking (my desk was right next to a staircase and was a high traffic area - long story), and I heard that they were trying to start up a group with people from the office. I inquired and asked if being inexperienced would be an issue. They didn't seem to mind, and they soothed me with a simple line.

"Don't worry, Tom. It's just like playing World of Warcraft!"

Music to my ears. Regardless of what you think of WoW, I spent a lot of time playing that game, so equating D&D to it was going to make this transition to the other side much easier. I meet up with my group after work one day to discuss who would be doing what, and soon Alakaiser the Sorcerer was created. (Had Player's Handbook 3 been out when I started, I probably would've made a monk. Ho-lee crap are monks awesome.)

There are plenty of tools online to help make character sheets, so it was pretty much as simple as creating a character in WoW (or your RPG of choice) and then pressing "print" to have something to carry around. I bought a couple of the books for easy reference (and because reading them in bed put me to sleep mighty fast!) and was on my way.

I won't lie - that first session was very slow. I think more than half of the group had never played D&D before, and only one person (our DM) had any experience with 4th edition. I guess 4th edition isn't popular with some people. I didn't really care about that, though. Once we all became more familiar with the setup of the game, we started moving along a lot faster.

At first, it really was WoW. Our DM was pretty smart and just started us off with a lot of combat-heavy sessions that were pretty simple to manage (and our tank was quickly introduced to the joy of rolling 1s over and over and over again). After we got that under control, that's when the game really began to shine.

I always knew that pen and paper RPGs possess a certain level of freedom impossible to create in a video game because you aren't restricted to lines of code, but I never really appreciated just how much freedom you really had. You don't just press a button, talk to an NPC, get your quest, and do it. When you're talking to an NPC, you get to decide what you want to say to them.

It was really fun the first time I got to persuade someone into increasing the reward I'd get for a quest we were going on. (Sorcerers are very charisma-heavy, so I got to do a lot of the sweet talking for my group) It felt a lot more fulfilling than choosing a preset option with [Persuade] in front of it, and then it was a guaranteed pass/fail. Bioware tries to recreate that freedom, and I have a lot of respect for them (Mass Effect 2 was great, although Commander Shepard is not about to be mistaken for Casanova, if you know what I mean), but it's just not the same as choosing the right words yourself.

Ultimately, though, the X factor for why this was so fun for me was the same reason as anything else I do in life: the people! We had a very laid back group of players who didn't really take the game too seriously. No one really got bent out of shape about any rules or anything, and while there was one issue with a tank/off-tank problem, it was quickly sorted out and we went back to just having a good time one night a week after work.

While it may not seem like it to the uninitiated, game dev can get really stressful at times, and having one night a week to just blow off all of that stress was nice. Eventually, we had a bunch of people showing up to our sessions that didn't even play! They just chilled, maybe had a drink or two, and socialized.

That was the real mind-blower for me. This weekly D&D night was a really fun social event. The connotation D&D has in my mind is that it's a pretty introverted thing, something that the so-called "super nerds" do, not anyone with any actual social skills. I was pleased to discover that this really isn't the case, and the game is entirely as good as the people who are playing it. The rules are there, but they're so flexible and open-ended that they're a non-issue most of the time.

Besides, any excuse to drink is good by me!
#Community    #Rants
Login to vote this up!