PAX East 2010: The British Guy Comes to PAX and Gets Emotional 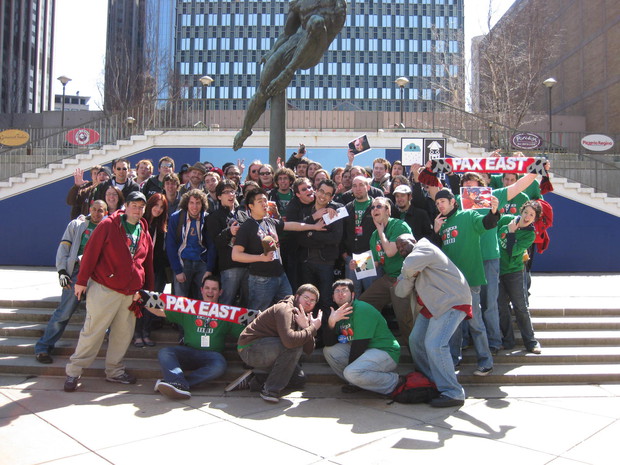 *Warning this is going to be a long and overly emotional post about how awesome this very community is, don�t read it if you hate us.

I really wasn�t planning on writing an overly emotional c-blog about my experiences at PAX East but I�m thinking this is how it�s going to turn out, it probably won�t even make sense anyway here goes we�ll assess it at the end.

Travelling alone doesn�t bother me, I�ve taken at least one holiday alone a year for the past couple of years and I love it, flying halfway across the world to hang out with people who I normally only chat to in the forums/IRC is a first. The last time I felt the way I did on Thursday was when I met Dtoid UK for the first time last October for the inaugural Eurogamer Expo in London. I was overly worried; would I get stabbed, raped, would everyone hate me or would I hate everybody? Like meeting Dtoid UK there was no need for to have been worried, everybody I met was fantastic and I can honestly say I�m missing each and every one of you already. I�ll mention this several more times but if you haven�t been to a meet up because you�re worried about doing it, don�t be. Join the Google groups, find out what�s going on in your area and if there�s nothing going on in your area organise something!

I was lucky enough to be staying in the same hotel as Kauza, Scotty G, Walk Your Path and Hamza which was cool because it gave me some people to walk to PAX with every morning and stumble home with every morning. These are four awesome guys and if you ever have the opportunity to grab a beer with them you should, Scotty even ended up sharing my room with me after they found out that there room would have been a tight squeeze with the four of them in there, sorry about stealing the covers every night Scotty!

The entire weekend of was such a blur I really can�t remember what I did on each day so I�ll just talk about a bunch of the highlights, I think I managed to grabbed about 12 hours sleep the entire weekend. As you�d expect PAX was spent mostly in queues although after queuing for an hour at the official merchandise stand I managed to pick up on of the sweet PAX East scarf�s that had sold out completely by Friday afternoon, I had people coming up to me all weekend trying to buy it off of me! The booth with the longest queue though was the Skate 3 booth, if you could beat their high score of 80,000 in the games Beat Tha Meat mode then you would win a Skateboard deck with some custom Skate artwork on the bottom. Needless to say this caused the queue to be out of control with some people queuing for over 2 hours just to try and win one, I saw a lot of unhappy faces walking away from that booth, luckily I was one the happy ones!

I got to play the Co-op demo of Splinter Cell: Conviction which solidified my decision to go and pick the game up, it�s so much fun. I was playing with a random guy and we worked pretty well together but I can see it working so much better if you�re playing with somebody you actually know though. I also got to check out a panel which discussed �Online Communities and Real Life Relationships� which on paper sounded really interesting but in reality was pretty boring. The panellists who spoke were all from websites who have communities that are largely near one another and get together regularly, I wanted to get up and explain that our community is worldwide and pull out all the stops just to get together and hang out at events like this.

By far the best panel I saw was the Mega 64: Panel for the Soul on Friday night. I was laughing before I even got into the room, everybody in the line was in such good sprits and then the panel itself was fantastic, it�s been an ambition of mine to see Mega 64 for a long time and the guys were on top form: New skits, making everything up as they went along and then they answered every question that people wanted to ask even though they were already running over.

Hamza stuffing his face with pie in an eat off at the P. B. Winterbottom panel was another highlight, I can�t wait to see round three!

XBLA has a pretty solid line up of games out this year: Breach looks like a solid FPS, as long as it can get a decent enough amount of people playing it, it could be a lot of fun. I had a ton of fun playing Snoopy Flying Ace and Hydro Thunder Hurricane with Scotty G and provided they don�t out price themselves they could end being popular games for people who want to play multiplayer with people in the same room as them. My game of the show is actually an XBLA game, Limbo blew everyone away if they managed to get their hands on it. Set in (funnily enough) Limbo, the game is a heavily stylised puzzle/platformer. The graphics, style and sound of this game are all gorgeous and it feels like the only way to play it is by sitting in a dark room with headphones on and the sound turned way up, it really is intense. I cannot wait for the game to hit this summer.

Hamza got a couple of us into the Mafia 2 event which was fun, I liked the game more than I thought I would and it�s something I�m paying a lot more attention to now. The same goes for Crackdown 2, I got to try out the team deathmatch mode and it was a lot of fun, maybe if a bunch of reviews so it�s good enough I�ll have another look at it.

Every evening we hung out a restaurant called Unos which is opposite the convention centre and it was an absolutely fantastic venue, the waitresses just let us take over entire sections of the bar so we could all hang out together, those girls got tipped well this weekend! It was great just to hang out with everyone, outside of the convention environment. It didn�t matter who you ended up sat next to everyone was happy just to sit and chat about anything (another great reason to get involved!) and it didn't matter if you had just signed up to the site and nobody new who you were, nobody got left out.

So tonight I got into New York City where I�m hanging out for a days and raised a beer to Analoge, Jon Bloodspray, Chewie, Volkarin, Danl Haas, Zen Albatross, Artic Fox, Icarus Kills, Kauza, Hamza, Walk Your Path, Necros, Samit, Wardrox, Nintendoll, Scotty G, megaStryke, Catract, Keener, Tino, Val, Funktastic, Jonny Viral, Bunny Rabbit 2, Dyganth, Wexx, Necros, Powerglove, Quisling and the dozens of other people that I know I�m forgetting about you are all more awesome than you know and you all made this weekend an amazing one for me. Everyone on this list is somebody that you should know and coming back to the point I made earlier don't be scared about getting involved with the community, post in the forums, write c-blogs, hop into IRC and find the Google group for your area and if it doesn't exist, create it! I know I can call any of these guys if I'm ever in their area and they'll come and hang out and show me around and if any of these guys are in the UK I'll meet up with them, grab a beer and if they need a place to crash I'll make sure they've got a bed.

In short we're all awesome.

That's PAX East in a nutshell, if you want to see more of the pics they're up on the Dtoid Flickr, whilst you're there check out the pictures from previous PAXs and other events. They've already announced that the it'll be back in Boston for the next to years, hopefully I'll see you all there.

They always say to end with a song, so I�ll just leave you all with this!


#Community    #GAMENARPS!
Login to vote this up!

My names Nik, I've been meaning to start to fill out this page for a long, long time but now I'm finally getting round to doing it. Anyway about me I�m 24 and live just outside London, I�ve played games all my life and owned most of the major consoles but it was Final Fantasy 7 that turned me into a gamer. Favorite games include FF7, Super Mario 3, Fable 2 Sonic and Knuckles, The Orange Box, Gears of War 2, Resident Evil 4 and other such games most of which are sequels, why is that?

I�m also a pretty big reader with Snow Crash, World War Z and Survivor being some of my favs. More recently I�ve gotten into comics in a big way I�m reading 100 bullets, DMZ, Invincible, Hellboy, The Umbrella Academy, Walking Dead and Scott Pilgrim at the moment. Always up for hearing some recommendations for new books to pick up.

I studied film at University and I've always been really into cinema, I could go on and list hundreds of flicks that I love but here's a few: (500) Days of Summer, Swingers, Dark Knight, Cloverfield, Iron Man, Top Gun, CONfidence, Bubba Ho Tep, Army of Darkness, Shaun of the Dead, Battle Royale, Anchorman and Heat being a few of my favs. I also make a point of going to see every game adapatation at the cinema (that's released anyway), I don't know why, maybe I just go in the hope that one day, one film will get it right.