The Game in Game Room: My impressions. 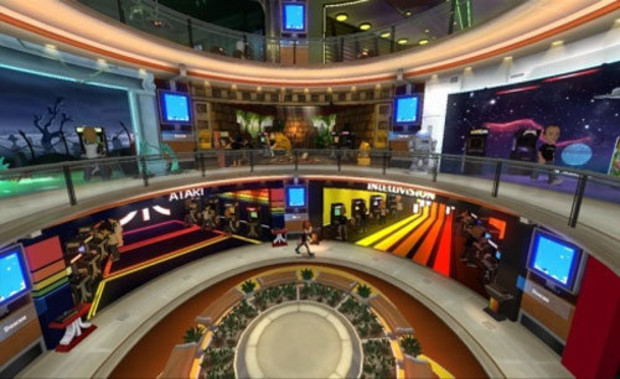 Game Room, Microsoft's fancy little way to make classic arcade games and Atari 2600 games relevant again, is now available to 360 and PC users. While I was busy with other games (and hung out with a friend visiting town for a little bit), I didn't actually get to try out Game Room until Thursday.

Despite the fact that some gamers (nobody on Dtoid at least!) out there have labeled me before as some 360 fanboy, I'm gonna prove them wrong right now. Game Room right now, in its current state, leaves a lot to be desired. Over time, it could be a creative way to get older games onto Microsoft's console, having a "rival" to Sony's PSOne Classics and Nintendo's Virtual Console. Right now, though, it seems lacking.

The game list as of this writing is a small 30 games. Most of them are commonplace Atari 2600 games like Combat and Yar's Revenge, but there's also Intellivision games I'm not familiar with. (No B-17 Bomber or Bomb Squad? Damn!) And of course, there's classic arcade games by Atari and Konami. At least Konami had the right idea with their selection: Go straight to the obscure stuff like Jungler (lambasted by Giant Bomb on their podcast several times recently) and Shao-lin Road. I'm saddened that Activision's classic lineup isn't there at launch, as I'd love to replay Pitfall and River Raid. I'm also saddened other publishers like Capcom or Sega aren't in the mix just yet, but the collection right now is fine for what's there. But the game library's not my only complaints with Game Room. The other is pricing.

I'm not a big fan of Microsoft's Points system. Or as I (and many other gamers) like to call them, "Microsoft Spacebucks." Especially the way the pricing is for Game Room right now. For instance, to buy any game in Game Room, you must pay 240MSP ($3). And that's only for one system (360 or PC), you have to pay 400MSP ($5) if you want it on both 360 and PC. Already bought it on one system and want it on the other? Pay the difference (160MSP/$2). Just want to give it a spin after trying out the free demo? 40MSP (50 cents). See, personally I would've nixed the "pay extra for both systems" choice right off the bat and make it a flat $3 to own it on both systems.

The other problem is that none of the 2600 or Intellivision games are worthy of $3. I can go on eBay right now and pay $1 or less for Combat, sans shipping. Granted, that's just the cartridge and I get no fancy digital cabinet, but I really would've made the older console games be $1-1.50, with the $3 price tag only for the arcade games. Imagine if Nintendo made every Virtual Console game cost 800 Wii Points flat. That's $8 for Super Mario Bros, where you could probably buy an NES and SMB/Duck Hunt for that price. There's a reason various systems have variable pricing, Microsoft: Not everybody's willing to plop down relatively large sums for older games.

The other problem I've heard from others is that they're irritated that their Live Arcade versions of Centipede and Millipede (among other arcade games) don't carry over to Game Room. I can understand why this isn't the case, as Game Room was likely only conceived last year and none of the publishers were factoring in this unannounced thing in the future when they released these 2-3 years ago, but this would only become a problem if publishers like Namco just opt to slap in Pac-Man and Rally-X into Game Room. Nobody really likes double-dipping unless it's REALLY worth it, and I doubt anybody wants to pay $3-5 to have Ms. Pac-Man again.

This does have a niche, however. While I was born in the high point of the NES era, I do have appreciation for the 2600 and older systems. I still have a 2600 in a case with about a dozen games, including one of my favorites, Berzerk. For those who started gaming about a generation or two ago (PS1/N64 era) may not appreciate the classics. Even for those who were around back then, they might not enjoy these games nowadays. For instance, I bet if Elsa (probably one of the oldest Dtoiders and GAP users I know) tried Game Room, she'd probably enjoy an arcade game for 5 minutes then go back to fragging dudes in MAG. So it's a somewhat limited appeal.

Despite that, I see promise in Game Room. I hope that Microsoft does add more and more games from other publishers, and really adjusts the game pricing later on, because it has promise. I'd certainly hop in and try out the new stuff weekly, and I wouldn't be surprised if I have a personal game room of my own to muck around in. I haven't tried any of the challenges, but I really do like the rewind feature.

On a side note, I am amused at the fact that my friends list Avatars show up if you're visiting the Showcase Arcade where it shows all the mascots, upcoming games and such, but my friend I mentioned earlier needs to stop showing up at every arcade I want to try. It's like she's stalking me digitally.
#Community    #reviews
Login to vote this up!