For those attending PAX East... (READ THIS) 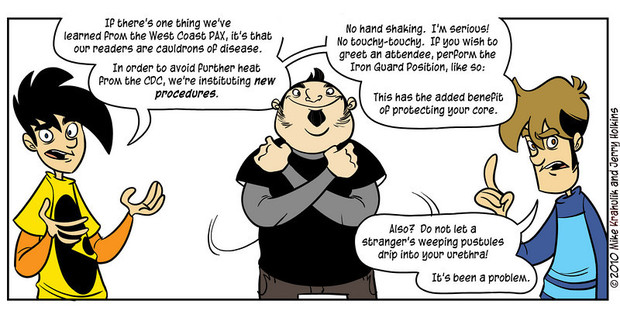 Listen to that comic strip, seriously. I don't know if Gabe and Tycho even know that currently, Boston is getting F'd in the A by the norovirus. It's kind of like when everyone was flipping out about the Swine Flu, except this time, it actually IS spreading like wildfire, instead of a bunch of media bullshit. At least 60 kids from my school have been taken down by it, yet another reason why I'm glad I live off campus.

What does the norovirus do you ask? Well... it makes you violently shit diarrhea and vomit two days straight, and believe me, they don't wait for each other.

So aside from treating everyone like a leper, what else should you do? Good question, the answer is make friends with this: So yeah, Boston is sort of disease ridden right now, that's what I'm getting at. Everyone at PAX is going to be in a confined space, touching a whole bunch of things other people have touched, and are probably going to be riding the T as well. Stay clean my friends.

Also, take the second to fap this up, just to make sure it can at least get to the front C-blog panel so everyone can have a greater chance of seeing it, thus decreasing their chance of spending Pax on the toilet holding a bucket.
#Community    #Industryevents
Login to vote this up!