I wasn't really a fan of westerns as a kid. Well, that is until my brother made me watch A Few Dollars More. After that I loved them, the serious ones, and the sillier, campy funny ones. They're all so delicious. Unfortunately, I've never been a big fan of shooters both first and third as far as video game genres go, and nothing I've tried has really changed that, so sadly I haven't really been able to enjoy westerns in my games as all of them are shooters. I really like seeing the character I'm playing, the way they move, attack, run, and I don't really get that with first person games. That and shooting in general just doesn't particularly do it for me. Even in most movies I prefer hand to hand or sword combat, it just feels more dynamic and interesting to me, and it's no different for me in my video games. Well, that is until I saw some game play footage of Red Steel 2. 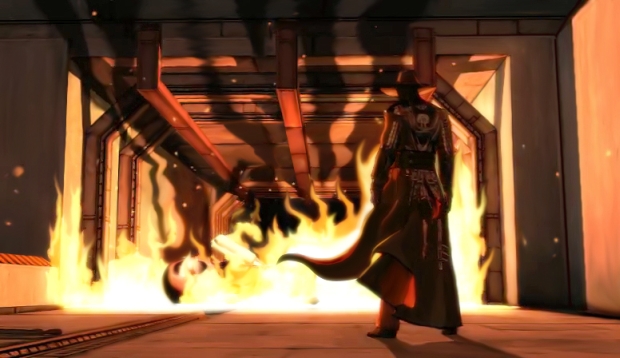 This is an edit. When I was writing this blog after taking a break from the game, I couldn't think of my criticisms for the life of me.I have two complaints about the game. One of which was mentioned in the official destruction preview, which is that in order to climb objects, you use the action button when it appears near special walls, as opposed to being able to go through it manually. It seems really jarring considering how much control you feel you have over the character. The other thing is annoying, but its an out of combat thing. As I mentioned in my blog, you are automatically targeting mobs while in combat, so you can swing your sword without your camera flying around all the place. This is not true when out of combat, so when you want to bash in crates that contain money, your camera swings around like an elastic flail. I've resorted to just using the spin attack to deal with crates, a button to fix the camera still outside of combat would have been nice, the "C" would have worked well, and then the "Check Objectives" command could have been switched to "-".

In addition, this game is absolutely 100% about the combat and showing what the Wiimotion+ can do. If you're expecting something particularly deep, you aren't really going to get it here either. That and while the environments look amazing, and the game also has a Metroid Prime feel to it, the game world itself is very shallow. Most areas are corridors and moderately sized rooms with little variation in it. This game isn't particularly deep, but the combat in this game is unlike anything I've ever really seen. How involved you get with the sword fighting is really unique, and the way the special attacks are built are very intuitive and dare I say, revolutionary. So if you're getting this game, expect combat like you've never seen before in a video game. Its exhausting actually! I actually enjoy that aspect, it just feel so involved(Though you can turn the sensitivity up if you want, the game has well done button mapping options.)

If this game continues to impress me as much as it already has, it just might rip the title of my "Favorite 3rd Party Wii title" right out of No More Heroes 2's hands. I absolutely love this particular exploration into the FPS genre, although this might actually qualify as a First Person Action Adventure title more. If you're looking for a really well done action game for the Wii, Red Steel 2 just might be what you're looking for and is undoubtedly making up for the really crappy first installment.
#Community    #Wii
Login to vote this up!