God of war 3, a playstation exclusive game, was recently released much to the delight of myself, and other fans. After spending multiple hours on this game across multiple play-throughs, I've come to the conclusion that there is something wrong with the game. After such a strong story in the first 2 games i was disappointed with the ending.

Now, this is not a review of the game, I cannot praise the game enough. In fact, the game is so strong all the way through, that it makes it really easy to nit-pick at the little details. If you haven't played the game yet, I strongly recommend going to play it now, it's a incredible, incredible game, and i don't want to spoil the ending for you. If your on the fence, or even interested in the game at all, don't spoil the ending, play the game, and judge it for yourself.

Well for those who stuck around, for a refresher, here is the ending...


Basically, Kratos meets Pandora, who Kratos, unlike his normal self, takes pity on, and tries to not-sacrifice her in order to access pandora's box once again to kill Zues. He fails at saving her, and opens the box to reveal nothing inside. Angrier then ever(is that even possible?) he fights Zues and kills him. Athena rolls down to congratulate him and demand he give her the power from pandoras box. Kratos reveals it was empty, however Athena reveals it gave him the power of 'Hope'. Kratos kills himself, releasing hope unto mankind, thus undoing all the chaos he has caused by killing the previous gods. Athena yells at him, Kratos dies, credits roll.

NOW! Before I start ranting about small details, let's look at the definition of a plot device.
A plot device is an element introduced to a story to affect or advance the plot. In the hands of a skilled writer, the reader or viewer will not notice that the device is a construction of the author�it will seem to follow naturally from the setting or characters in the story. (definition found Here) 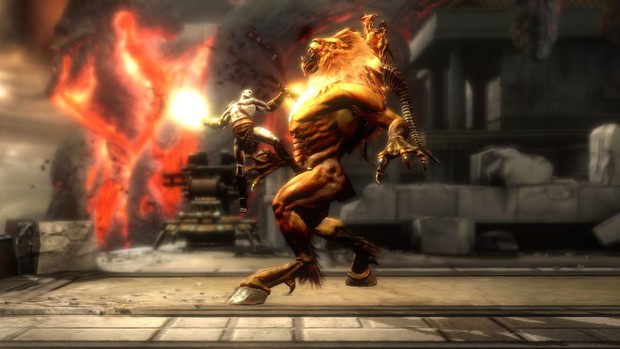 There is a reason he's so violent

Kratos is evil
Like I previously stated, Kratos does super-violent things, and that's who he is. Your not supposed to think he is a anti-hero, he's not. There is no greater good he's fighting for, no end goal except his selfish vengeance.Gia once helped him achieve that goal, and when in need she has a choice to save herself, or Kratos, she chooses herself, because the titan war is greater then Kratos' vengeance. It's a valid argument, and she drops him into the underworld. That goes to show that Kratos really has no friends. He gave the titans a second chance at rule over man, helped the titans out indefinitely, gave them salvation when all was lost, and she just dumps him like a piece of trash. In short...

No one trusts Kratos
From the start of the first game, people state, they would rather die then be saved by the ghost of sparta. His signature white skin and red tattoo's have earned him a in-game reputation as merciless and deadly. No woman, man, or child want to be near him. Every one is scared of him just by reputation. Now when a child says she isn't it shocks the players senses a little. Why isn't she scared? who knows? doesn't she know who he is? It's not like he's a good guy deep down. Kratos himself acknowledges time after time again that he's not a good person. In fact, he tells Pandora that she shouldn't trust him. Why? Because as the game has proved, when the time comes to sacrifice her, he won't hesitate, which is ironic because for the first time with this girl, he hesitates.

Kratos isn't loveable
You know what happens if you love Kratos? A god tricks him into killing you. Not only did he put up a gruff exterior(im really not trying to be cute here...) but the one person who accepts him and bears a child with him, he ends up killing. Now, im not saying you can't like Kratos as a character, sure he's pretty awesome to play as, the definition of a bad-ass, and well, your killing gods, who else can do that! But the affection Pandora immediately shows Kratos is off putting. It doesn't work. She shouldn't be able to like him at all. The expected reaction is something like the oracle from the first game. She shows a odd comfort around Kratos, it's offputting just like it should be. The player would think "why...does she not care that he's a ruthless murderer?" then she looks into his mind, and is shocked, and you agree, yeah, he's done terrible things and is a terrible person. The game agrees because it's true. The oracle didn't know who he was, which is why she was ok with him. But Pandora does know who he is. Hell Athena helps him once by making him a god, tries to help him twice by getting the other gods to leave him alone, and the third time she helps him? Kratos kills her. She then goes on to use him to gain more power in the third installment. All signs point west, yet Pandora grabs Kratos and drags him south. You may not be going in the complete opposite direction, which would be making Kratos a 'nice guy', but it still doesn't make sense to go there.

Kratos isn't a hero
Now because Kratos takes pity on Pandora, he is able to gain access to the power of hope, by remembering her message, forgiving himself, and conquering fear. With the help of her, Kratos is able to finally, finally finally put his vengence to rest. Athena begs for the power of hope, but Kratos decides to undo the chaos he has caused, and cast hope upon man. A very Greek ending, but not a very God of war ending. Kratos the character isn't trying to be nice. He may have forgiving himself for killing 3 people, but that doesn't mean he hasn't killed thousands of others. He is still a evil person. To kill himself after completing his vengeance with the purpose of saving humanity, a very selfless act, isn't what he would do. The Kratos the players have been playing this whole time, would find a way to kill Athena who had used him as a pawn, and keep the power of hope to himself. The whole Pandora and hope thing is a bullshit way to show compassion inside a complete evil fucker. It's a dumb plot device used to effectively erase the consequence of Kratos' actions thus far.

Also, and this is another argument all together, the muse music game, breaks the 4th wall by admitting there is a controller in your hands and your playing a game, with the whole guitar hero-esque music game. Also, weren't there more Titans left to kill/interact with? This is all just nit-picking at what is a superb title, so don't get too upset!

Anyway..i dunno, this may all be complete b.s. but that's how i viewed the game, the character Kratos, and how i saw the ending. There's lots of debate on the last 4 seconds of the ending, where you see no bodie of kratos, just a blood trail leading off the mountain. I'd like to think this is the end of the series however. It's a fucking awesome game, and a great way to go out on top.
#Community    #PS3
Login to vote this up!