Why Heavy Rain is awesome

Heavy rain is a game that has been receiving, from the majority of consumers and critics, mediocre praise, or slight refusal, also known as 7/10, which, obviously is the worst score a game can receive. On metacritic, the game has a 87/100, which actually is a very good score. Now while i don't think the game itself is worthy of quite a 87, i do think that the experience i've had with the game is deserving of much more. It's the experience prior to, and after the actual game that make it easy for me to say, that heavy rain is awesome.


Prior to getting the game, i was all over the videos, pr hype, images, impressions as i usually am with any major release. Like most hardcore gamers i have a insatiable appetite for games that developers never seem able to keep up with. That's not to say im buying all the 'hero' games activision pumps out (actually that's a bad example, rockband 2 is the only music game you really need....), but new titles, loved franchises, the god of wars, socoms, halos, to the Valkyrie chronicles and demon souls, i buy all games of all kinds. My gaming collection at this point is probably bordering on the 100 mark, with a backlog of unfinished games, unfortunately nearing the 20's, but i was glad to pick up heavy rain on day one, and pop it in front of the line, and playing it from start to finish in a day.


I knew that this was a 'movie', more then a game. i knew what i was getting into. I mean really, the game itself says what it wants to be by giving you a trophy for doing nothing but popping the game in, saying thanks for supporting interactive drama. That's the point! It's not so much a game, but at the same time, it's not just a movie you watch. (it's not a good movie, but im sure Jim Sterling can tell you all about that.) The piece of software i popped into my machine, i came into that expecting a experience like nothing i've had before. That's exactly what it was, a experience. It wasn't quite a game, it wasn't a movie, it was a experience that you can't really get any where else. 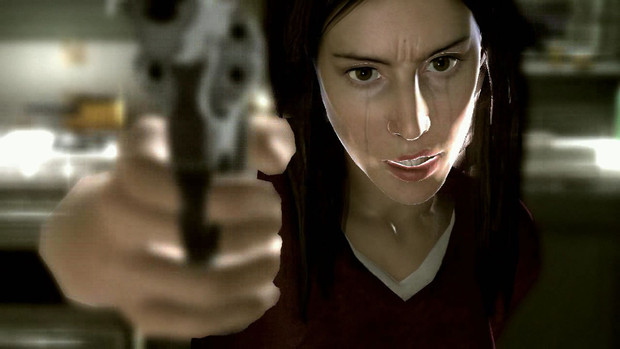 i actually never saw this part of the game. Lauren, the character in the picture ended up not making it to the end for me, and i guess i missed out on what could have been one of the more emotional parts in the game.


After beating the game, i was scrolling over youtube vidoe's gamefaqs forums, dtoid comments every community site that was talking about the game. Having conversations with people across the internet about choices they made, outcomes of action scene's, deaths, endings everything. Everyone seemed to have a very different ending then mine(partly cause i wasn't concerned with 4 heroes) and those who had the same ending, still seemed to have small differences. It was awesome to have a conversation about particular conversations and choices, which usually led to "oh my god i never did that, that's awesome!". The game essentially creates a bunch of smoke and mirrors, and give each player a unique experience. It's all a bunch of b.s. cause honestly, the game holds your hand and drags you kicking until you hit the end, but it does a excelent job of the smoke and mirrors. The fact that Destruictoid had a spoilertoid episode about Heavy rain is exactly what im trying to get at. The community around the game, after it's conclusion is aweomse. It's why unique story's are awesome and it's why heavy rain is awesome.

Now before you say it, i understand that why i love this game is the same reason that people love mass effect 2, and yeah, i like that game, much better game play and story and actually talented voice actors and everything i better in me2 then this, but that's not the point im trying to make.
#Community
Login to vote this up!