My problem with JRPGs

4:26 PM on 03.16.2010 (server time)    0
Before I start, let me say that I LOVE role-playing games. However, my childhood self didn't know that yet, so he asked for a Nintendo 64 for Christmas instead of a Playstation. While all of my friends were playing Final Fantasy IX, I was taking my first steps with Paper Mario and Quest 64. So my first few big gaming experiences were much less dramatic fares, and that had an effect on me that still carries to this day. However, between then and now I've sampled plenty of other RPGs both Western and Japanese, and I have to admit that very few JRPGs could hold my interest. I think now I can finally pinpoint why that is.

When I took a look back to the JRPGs I liked- namely Persona 4, Chrono Trigger, and Disgaea- I found that they all had one similar trait. None of the protagonists dealt with personal drama. Now I know I sound like I'm repeating the tired 'Hurp derp JRPG iz full of emo kids' argument, but hear me out. Mass Effect 2 is full of characters with personal issues and plenty of people loved the game even more for it. Same with Persona 4. The only character not showing conflict or deep emotion is the main character, or rather, the character that the player is controlling.

I don't hate drama in RPGs. But when I pick up the controller and I'm ready to play, I expect the hero to match that. Let me give you an example. My brother was borrowing Star Ocean: The Last Hope from a buddy of his. I was watching him play and following along with some of the story. For a while, it seemed pretty fun- the world was vast and the story toed the line between serious and hilariously cheesy. But at some point in the game, a major plot twist occurs. Without spoiling it, the main character gets partly involved in an enormous fuckup which he (for some reason) blames himself for entirely. The scene that followed was painful for me. Despite his entire crew telling him it wasn't his fault, he decides to go off on himself on how stupid or thoughtless he was. Something to that effect.


I know if I had been playing, guiding that same character's actions for 20+ hours, I'd probably have to agree.


All of the games I've played that produced real gut-wrenching emotion in me all present themselves the same way. They'd take me to along on their story, allowing me some control but keeping me by the hand so I didn't miss any of their narrative, and then when it finally reaches its climax, and finally I see where the story had taken me, they release all narrative control and ask me ever so smugly, "And how did that make you feel?" With a number of JRPGs, however, they take me to that climactic moment and then immediately afterward tell me "THIS IS HOW YOU FEEL. Moving on..."

The main character, in my mind, ought to be much more pliable than the rest of the cast, partly removed from the storyline so that the player can inject some of themselves into the story and feel like they're actually contributing to it beyond just swinging the sword and moving. I'm not saying that every JRPG needs a silent protagonist or unfeeling bastard, I just want my drama given to me rather than stuffed down my throat.


But can't there be rich, fulfilling stories with main characters that can feel heroic regardless how the player defines them? Most WRPG loyalists would say no. There's no type that could express a multitude of emotions the same way they would none at all without betraying their Eastern sensibilities. That's a shame, because I'd love to play an JRPG with a main character that could be both a hardened warrior and sensitive and caring individual. That would clear up my gripe with JRPGs and probably make it more accessible to a western audience. If only there was some type of cultural or historical icon that JRPG developers could draw inspiration from... 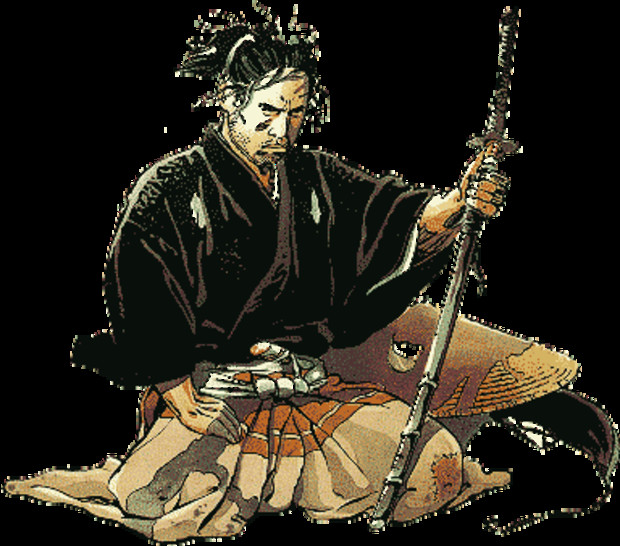 Just starting out on Destructoid, so if anyone has any tips on how to suck less in this community, has anything to add to my blog, or just wants to tell me what an overblown idiot I am, send me a message.

Also, if you need someone to make your team look good in Team Fortress 2, let me know so I can drag down the other team.