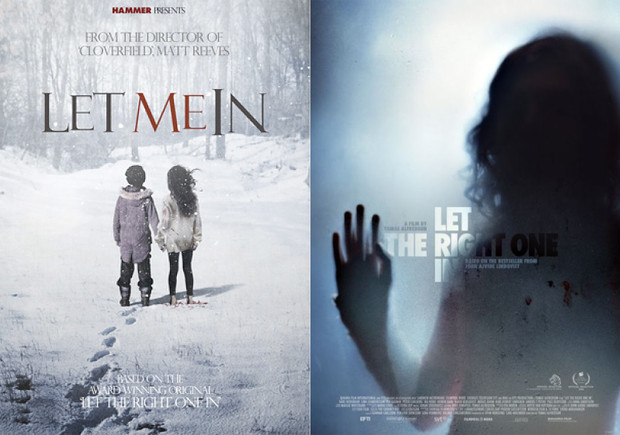 Let The Right One In is a marvelous Swedish movie based on a book by the same name by "John Ajvide Lindqvist" (which is available in Barnes & Noble and other bookstores here. You'll probably have to special order it though; while I was looking I got the last copy. They told me copies were coming in all the time but selling immediately.) Interestingly enough, there are English versions of the book which were also retitled "Let Me In" (mine has the original title, and a variant of the DVD cover for the book cover. I think the retitled one is pretty rare), and the author wrote the screenplay for the original movie.

It tells the tale of a young outcast named Oskar, and the friendship he develops with the new neighbor girl, Eli, who just happens to be a Vampire. The story that unfolds is a beautiful story about love, and what that word means.

Casting for the remake, "Let Me In" is completed and work is underway.
* Eli (the female lead) will be played by Chloe Moretz (Hit-Girl in Kick-Ass, Rachel in (500) Days of Summer) and is being renamed to Abby.
* Oskar (main character, male lead) will be played by Kodi Smit-McPhee ("The Boy" in The Road) and is being renamed to Owen.
* Hakan (Eli's "father") is being played by Richard Jenkins (Dr. Doback in Step Brothers, Nathaniel Fisher on Six Feet Under), and is only referred to as "The Father" at this time.

The casting is great. Kodi was amazing as "The Boy", and Richard Jenkins is a brilliant actor. But the rumors I'm already hearing (the second "discovery" about Eli, which although not covered in detail in the original movie as in the book; is being completely left out for one thing) combined with America's track record...

When did you start playing games? I can honestly say my entire life. My dad used to let me play computer games on his desktop back when most households didn't even have a computer at all.

I play drums in a band called documentary. Music and Videogames together are two of the biggest parts of my life.

If you're interested you can hear my band here or even better, see it here!

My band is something of an experiment. We created the Myspace page for the sake of venues, but otherwise we do NOT use it at all. All of our shows are advertised via Word of Mouth and old school methods. The only online advertising is done by us on our personal Myspace/Facebook pages to our real-life friends.

So far, it's working fairly well.