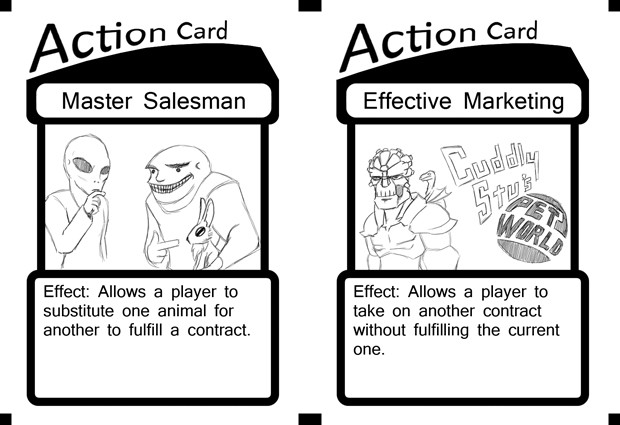 Results and plans for next revision.

Considering the DRASTIC improvements made to the game as a core, it's gone from a practical dead end to something with real potential well beyond the initial concept of "a gin rummy variant." All in all, a much more impressive play this time. Although the game still doesn't have a formal name, something I'll have to change for the third playthrough. These are the planned changes for the next test.

-Emphasis on the Actions system, making everything you do an action. From entering trade negotiations, ridding yourself of worthless trade queues, to drawing cards, everything will be an action with your choice on how you spend it.

-More variety to the contract cards. Instead of the contract cards being the endgame itself, they'll now be Victory Points towards a numerical goal. Likewise, they will now have alternative creatures to fulfill the goal. This will, of course, increase manufacturing cost but my goal is fun game, not cheap game.

-Bounty chits will be introduced. For example, a player will have a certain number of chits at the beginning. When giving up on a contract, they will place the contract in the center with their numbered chits. For other players, this increases the point value of the contract. If the player takes back a contract with their chit on it, it reduces the value of the contract. This may be an optional rule or a possible expansion concept rather than base game rule.

If you would like a copy of this game to print and test out in it's next form, feel free to send me a message here or leave a comment. I'm continuing this diary, despite lack of interest, because a few people I know are following the progress of this game.
#Community    #NOTvideogamesrelated
Login to vote this up!