I just had the best idea that other developers should use in their games...

So, you know how many games give you choices, but it doesn't affect the story that much? And you know how you almost always get to pick what kind of person you are before you start, changing the dialogue (I'm looking at you, Mass Effect!)? Well, why not just add a three - five hour section of said character's childhood. The choices you make as a child shape you to be an adult. For that matter, why not let it lead to entirely different storylines? But also use it to show some adolescent memories the protagonist had that leads to some of the problems he contracts as an adult. Not only do I think this is a good idea, but it could lead to really good player immersion, since everyone has gone through that period in their life. It would be a son of a bitch to make that game, and probably only appeal to five people, but hey, that's what indie developers are for.

I always had the idea of making a game set in a realistic feudal Japan, long before the American "Black Ships" came in. You could start a prologue chapter as an adolescent (enter age here; to make it you'd need some background on Japanese culture so that you could learn when the influential period was for the Japanese at that time) and have some backstory set up for you, a rival, a love interest, basic stuff. But how you act during that period of time will shape the goals and the skills of the adult main character. For example, trying to defeat your rival will make you a fierce warrior who has difficulty adjusting to normal life and always wants to fight no matter what. OOOOOH, OOOOH! Better idea. This is going to sound a little weird, but you could have someone who loves the girl, very much, but through investigation, he learns that she's fucking another guy and his hurt by it. When he grows up, he becomes a conspiracy theorist investigator but he shies away from women and turns out to be a pedophile because of his failed love, (except for a realistic Japanese setting no one in the game would think this is weird, because at that time, it wasn't. But you'll always have to deal with the fact that you're a pedophile. Weird, I know.

Okay, next topic, I just wanted to share with you this awesome mod I found for Deus Ex. That's right, you have to reinstall that game again. It's called The Nameless (a little hint at 4chan's Anonymous), and it's basically a physical representation of the internet world. Here's how the developer describes it. 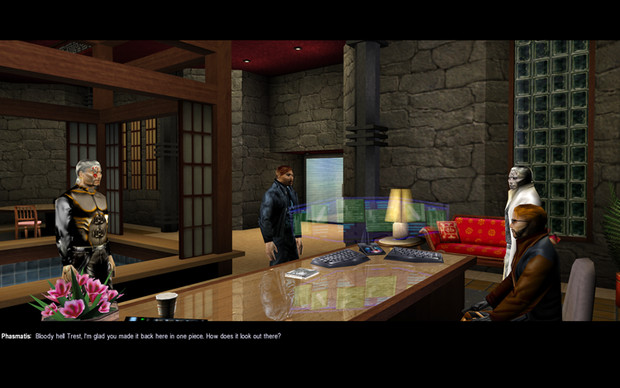 In Forum City, the Internet is serious business. As its name implies, the city is the physical embodiment of Internet forums and bulletin boards. It's more like The Matrix or Tron than Second Life, however, as the troubles of the city are no laughing matter. Embracing the style of Deus Ex, Forum City has as much crime and conspiracy as the world of JC Denton � but most citizens would have it no other way.

The lust for power seems to come easily to those who call the city their home; everywhere there are factions scheming to increase their reach, or even wrest control of the city itself. Were it not for a peacekeeping triumvirate of invulnerable Moderators the city would quickly plunge into chaos.

This has been the way of things for as long as most care to remember.

But now, the balance of power has been upset. Unthinkably, a Moderator has disappeared, and panic is gripping the city. With the remaining Moderators spread far too thin, the lawless have found themselves with the freedom to prey upon others, and formerly suppressed rivalries threaten to explode into open conflict.

You are called upon to silence the discord.

Throughout the course of the game, you take on the avatar of Trestkon, a former intelligence agent whose reasons for leaving the city are mysterious, at best. Negotiating for his return was an act of desperation, but having known him personally, the remaining Moderators trust that he can find their missing colleague before it is too late.

Two years can change a man, however, and Trestkon's loyalty is not set in stone. Now imbued with legal authority, he could tip the balance of power in virtually anyone's favour, and the multitude of factions are well aware. Corrupt corporations, religious fanatics, cyber-terrorists, and even deadly computer programs will stop at nothing to gain Trestkon's allegiance."

Here's one of the trailers:


It was just so awesome that I had to share it with you.

Until next time, Just Shut the Fuck Up and Play Games.
#Commentary    #Community
Login to vote this up!