This gamer is not yet Moved 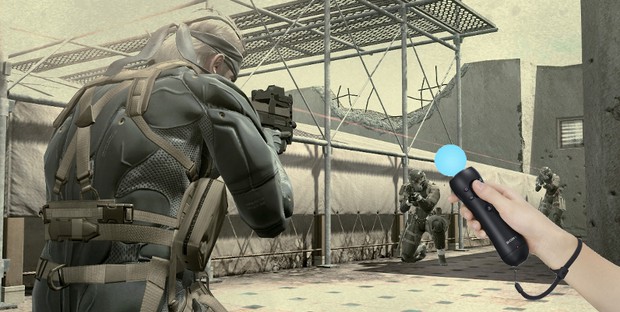 Playstation Move is here. The PS3's answer to all their motion control problems "officially" debuted at GDC, though honestly, we've all known this was coming for about 5 seconds after Nintendo finished their E3 2006 press conference. Though it lacks some of the sleekness of its main competition, especially with that big ball at the end of it, Sony confident it's good enough that, with the PS3's superior graphics, it can syphon off the Wii's userbase and leave Nintendo a crushed shell. Oh, and they're likely hoping it helps the company's overall bottom line, as the video game division was one of the few shining lights in their last yearly earnings report while many of the other electronics divisions had imploded.

Having read up on Playstation Move, I come to the same conclusion I came to with the Wii Remote and to a lesser extent so far with what I've seen on Project Natal: there's promise and potential, especially in a few certain genres and areas, but I've yet to see it applied in ways that are truly, mind-blowingly revolutionary. That's perhaps the problem the Wii is suffering from, even though it has many solid, if totally overlooked titles, and it's a problem I'm noticing with what we've seen so far from Natal, which admittedly, isn't much. Now, this could very well be due to the "new-ness" of the technology, but I think there's a bigger problem along those same lines which we're seeing now on the Wii: outside of a handful of developers, no one knows what the fuck to do with these new controllers. And it shows in the kinds of games being made.

Finding good developers who have a firm grasp on motion control is going to DeviantArt to find good drawings: sure, there are plenty of great artists on that site, but you have to dig through so much fail to get to them that you'd probably quit before you got to the good stuff. But if the Wii is any indicator of where Natal and Move might head, it's not good. Yes, Wii third-party developers are seeing poor returns on their games, but my personal belief is that it doesn't have to do with "teh graphix" or not having something like Xbox Live so much as the games are not really pushing any boundaries.

Think about it. What kind of games have we been seeing lately on the Wii? It's been a lot of multiplayer games with minimal use of the Wii remote, just shaking and moving and tilting a bit; retro remakes on WiiWare and in a few games that don't use the Wii remote as anything than a controller; workout games that only use the Wii remote to measure movement; FPS games that are essentially just fancy light gun games; and hack-and-slash titles where you get to swing the Wii remote around like a sword. Yes, there's exceptions to these groups, but Wii remote diversity is sorely, sorely lacking.

Likewise, with the Move, what did we get? A FPS game that looks like a super-fancy gallery shooter; a Wii Sports knock-off with a more mature theme; a party game with motion controls; a boxing game that uses motion controls; and a game where you fight while riding office chairs around a city. Can you pick out which some sounds different? If you guessed the last game, Slider, you're right. Otherwise, what haven't we already seen done? Where is the excitement Sony was supposed to bring with Move, the excitement that was supposed to kill the Wii's implied boredom and staleness? They can't just be thinking, "Let's do what Nintendo did, except prettier!" because that idea is not going to fly, especially not when you're making a $100 investment for each controller in the Playstation Eye bundle, and probably $50 each on their own, I'd guess.

Now that the worst-kept secret in gaming is out in the wild, it'll be interesting to see what the third parties do, because what kind of games they make will be a big determining factor in how Move works out. But so far, color me a bit underwhelmed and unimpressed. Like with the Wii remote, there's some nice promise with Sony's controller and with some of the franchises they own, but I'm a healthy skeptic about hype. Let's see how things are going a few months after launch, and perhaps then, the picture will be a bit clearer.
#Community    #PS3
Login to vote this up!