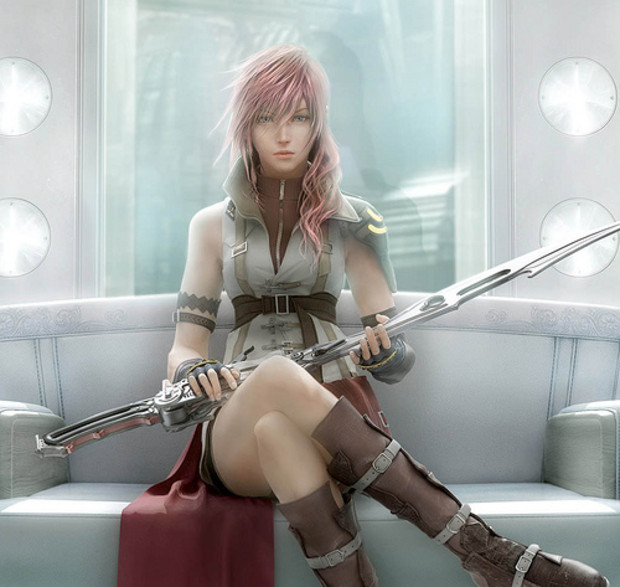 People are liable to go bat-shit insane when I say this, but 9 hours in, and Final Fantasy XIII is barely a good game.

I'm nowhere near done with it -- I'm still interested in advancing further in the game. I'm not writing these impressions to dismiss the game outright as a massive disappointment -- I have played worse games, and even worse games bearing the Final Fantasy title.

My gut instinct at this point, however, is to be scathingly critical of the title, but I don't think I'm going to give into that feeling in this set of impressions.

And one more thing before I actually talk about Final Fantasy XIII.

I'm a gamer who even started identifying as a gamer after completion of Final Fantasy VII. During that point in my life, FFVII was the most robust game I had ever played, and it solidified my passion for videogames. I no longer claim that FFVII is one of my favorite games of all time, or even one of my favorite Final Fantasy games of all time (so I don't personally hold it on a high pedastal), but there is little doubt that it established my identity as a gamer. Hell, my avatar is an Ivalice Moogle -- Final Fantasy can be a big deal to me.

WATCH OUT BELOW: THERE MIGHT BE VERY MILD SPOILERS, BUT I PROMISE NOT TO DROP ANYTHING BIG

So far, XIII succeeds on a few levels for me:

1) I like the art, and by extension, how the art has managed to be rendered so well in the game's graphics. I know there are quite a few vocal groups of long-time Final Fantasy fans that hate the more futuristic art direction of the series, but I've always enjoyed it just about as much as I have the more traditional fantasy art styles in some of the earlier games.

2) The combat has picked up to a level that I find ultimately enjoyable, though not flawless.

3) There is something about the story that remains oddly compelling -- just compelling enough to keep me playing with a curiosity as to what will happen next.

But where is XIII lacking at 9 hours in?

1) In responding to #3 about the story, there are sore points. For one, dialogue is weird at times. I don't think I attribute this to the fact that it's a Japanese game -- sometimes I feel like the things that characters say would have been perfectly permissible in text form, but when delivered through voice acting, they seem plain weird. There's lines that would've been used in text form to better convey emotions and personality when those qualities were harder to convey without voice, but now it feels like excess melodrama. Too often do critics in this industry attribute this to some weirdness that the Japanese have -- and it might be true, because perhaps this is some sort of conversational style in the Japanese language that I don't quite comprehend as an English-speaker... I don't know, but the awkward feeling or outright feeling of embarrassment I can feel during some line deliveries becomes distracting from the game. It takes my focus away from what's actually trying to be conveyed here on a story level. Even then, sometimes story elements are reiterated far too much. How many times must Snow proclaim his intentions of being a hero? In my head, that was well-established after 15 minutes, but here I am an hour later still getting his proclamations of rescue and heroism; an hour later Vanille is still hopelessly optimistic; an hour later Lightning is again quick to get pissed for whatever seemingly minute reason; an hour later Hope repeats his same reluctance to share his feelings and throws a fit. I got it the first couple of times -- a bit of reiteration was fine; the level of reiteration that I actually feel like I'm experiencing can get a little ridiculous, especially in tandem with my next point.

2) Pacing of "exploration" can seem awful. So far, most of the areas I've trudged through have been linear as all the other reviews, previews, and impressions have pointed out. I came into the experience knowing this. Sharing this quality with Final Fantasy X (one of my favorite games in the series, mind you) seemed like something I would have been able to forgive, but sometimes these areas feel like the plod on far too long. Off the top of my head, I can recall at 9 hours in only having visited 4 different, distinct zones (of course, that's me going off of memory and not quite remembering clearly, as I've had plenty of other things in my life to keep track of between sessions of XIII. That means each one was roughly 2 hours long, and they all felt super repetitious when it came to enemy types that you engage or just the visual look or map layout of the places. The linearity itself isn't the issue -- it's actually how the linearity is presented, because again, I really liked Final Fantasy X and its exploration was essentially not much unlike that in XIII. In Final Fantasy X, the linear nature was presented in what I feel like was much more varied areas. In Final Fantasy XIII, I feel like I'm pushing through the same exact area in an almost straight line for far too long. X also had random encounters, not specifically-placed encounters dispersed across the map. I sort of had a choice about how long to linger and advance my characters. XIII encourages you, even through dialogue, to continue to move on as in when Lightning says, "Trust that I'll watch your back. Focus your attention on pressing forward," or something to that extent, in Chapter 5. Well Lightning, I kind of want to, because it feels like I've been in this damned forest for 3 hours!

Anyway, I risk getting too ranty. There's enough quality to be found in Final Fantasy XIII that keeps me going, but I am definitely having to draw upon my patience to persist. Hoping to hit that mark in the game that truly opens things up, as has been promised by some of my most trusted reviews and impressions, including some that I've seen on this very site. Regardless if the game becomes absolutely fantastic later on, I must admit that XIII's extended opening hours will no doubt haunt the experience as a whole.
#Community
Login to vote this up!