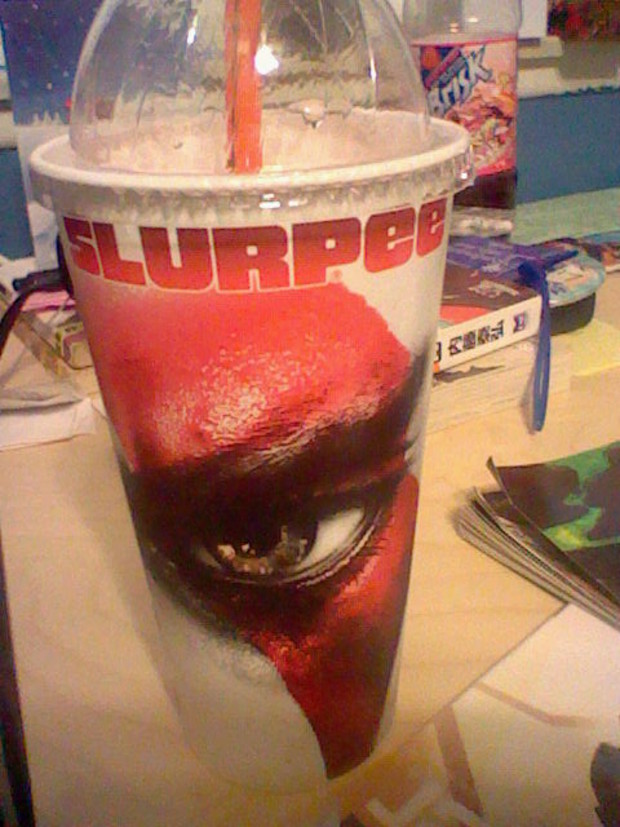 While I currently don't have the means to get a PS3 and God of War 3 at the moment (still saving), I did manage to get a taste of the game's very own Slurpee flavor, dubbed Kratos' Fury. A very purple Raspberry Lime, it's actually not that bad considering it's a different, yet pretty obvious advertising stunt. Read on for a bit.


While the flavor does little to incite any inkling towards any actual "fury" that Kratos is capable of, it is not a bad drink at all and is one of the better flavors of Slurpee to come out for a while. It is all at the same time very sweet (which is sort of an anti-Kratos factor) and slightly bitter, with the slight tangy bite that wakes you up if you're not paying attention. Maybe that was the "Fury" part of the drink? Hell, I don't know. But I do hope that they keep this flavor as a regular lineup. Lord knows how much I'm getting bored of Pina Colada and Coca-Cola.

But like I mentioned before...what the hell are they getting at with the "Fury" thing? Was I supposed to have my head ripped off Helios-style by the Ghost of Sparta? Was some grand battle supposed to take place after my first sip as Kratos takes down 50 armed skeletons and moves in to stab a Gorgon in the eye as a massive falcon/harpy looking thing flies overhead and a heavy-metal soundtrack plays in the background backed by 100 violins? Maybe. But then again if you're promoting GoW III, anything other than "fury" or the like would be rediculous. Anyway, as cheap as Slurpees are, don't hesitate to pick one of these up. They're there until the end of March.

Final Score - 10 (BUY IT): Achieves flavor greatness and is not to be missed by anyone for the short period of time that it will be available.
#Community
Login to vote this up!