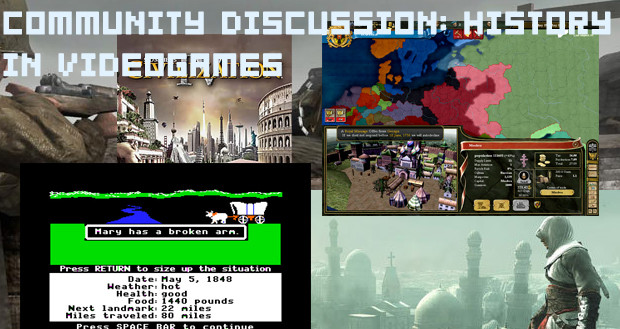 So, last week Destructoid members Kraid, Beverlynoelle, Cadtalfryn and myself got together to generally discuss history in video games. This was done to possibly be part of a project for one of my graduate seminars, but also as kind of a prototype for having a slightly more academic look at a specific gaming topic. That being said, the tone was very casual, and we didn't throw around too much fancy terminology or historical facts.

(The show can also be downloaded from here)

Although I had outlined several specific questions that could be talked about, the discussion ended up bouncing back and forth between various games, so the only time division I could determine is:

Here's a (rough) list of some of the games/series that we talked about at some point in the discussion:

Fallout 3
Bioshock
Civilization
Men of War(Kraid recommends for everyone to pick this hidden gem up!)
Hearts of Iron
Europa Universalis
Call of Duty series
Medal of Honor series
The Total War series
Assassin's Creed series (we talk about this a fair bit)
Oregon Trail (how can you not mention this?)
Tropico 3
Death to Spies
The Saboteur
Brothers in Arms
Darkest of Days(!)

Some of the themes/points that were brought up were:

The "little touches" (music, art style, etc.) that developers have included in games to better connect them to the past, even in otherwise fantasy-based games like Bioshock and Fallout.

The tendency to focus on war and combat in historical games, and what alternatives are there.

The differences between focusing on historical accuracy and historical detail.

What kind of historical games we would like to be made.

Games getting people interested in history, rather than being explicitly educational.

I apologize in advance for my louder voice, and tendency to talk/ramble too much. Also, this is my first attempt at hosting and recording a podcast (or even being on one, for that matter) so I'm just happy that the recording went smoothly. I hope whoever ends up listening to this enjoys the discussion, and leave any comments you have.

(P.S. Coming from this, me and Kraid are thinking about finally organizing a Canadian community podcast (hence the account for hosting the podcast being put under the tentative title, "Mapletoid"). Any fellow canucks who are interested can let me know through the comments, PM's, or my email (fencerdirk at hotmail dot com))
#Community    #Podcasts
Login to vote this up!