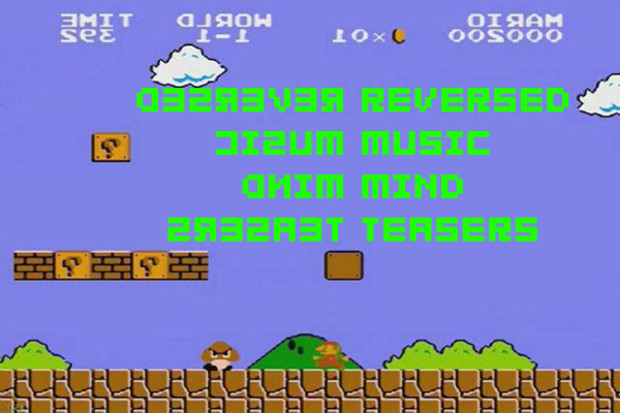 What if the tables were turned? The coin flipped? Other sides broken on through to?

In this new weekly(?) feature, I take four pieces of music from different video games and play them in reverse. Your job is to figure out what song it is and what game it's from (I will accept approximate guesses, like "boss battle from game X"). They are put in order from easiest to hardest (from my perspective), and cover the full range of games, from retro to new, from popular to obscure. Also, there's a fifth "WTF/bonus" track that is from regular music, TV or movies that I put in as an extra challenge, or because it sounds especially odd played backwards.

I'm not giving away any prizes for this, other than bragging rights for whoever guesses the tracks first. Though, if there's enough interest in this feature, I might start offering them eventually.

For this first iteration, I picked tracks that normally should be quite recognizable. If it isn't obvious, three are retro tracks and one is from a recent release. If people guess these too easily, I'll start throwing in more obscure selections in future weeks.

The tracks run thirty seconds each, so you can skip around easily. The selections are (with clues):

#1 Easy: If you can't recognize this, you must be from Detroit.
#2 Easy: I bet a lot of you will get this.
#3 Medium: Get moving to that sharp beat.
#4 Hard: If you can't get this, don't let it bring you down.
#5 WTF: It sounds Swedish, adding another nationality to this culture-clashing classic.
#Community    #Retro
Login to vote this up!