Rhythm games and how they made me listen to music again.

1:57 AM on 03.06.2010 (server time)    0
I apologize in advance if this seems like the same old regurgitated junk you may have read a thousand times before in other places, even on this same site. But one thing I realized lately is my lack of writing anything lately. Yes, I've written papers as college assignments recently, but not a casual writing session. So here's something I've been thinking about.

I remember around 2007 when Guitar Hero started getting popular. I remember listening to Larry "Major Nelson" Hyrb's podcast at the time where he made an argument against the cost of DLC for Guitar Hero 2, which was 200MSP for a song (about $2.50) and 500 for a pack ($5.25 or so). Nowadays DLC is at that simple "$2 for a song, $5 for a three-pack, more if there's 6, 10 songs or a full album of 12-13 tracks" plateau we enjoy (or complain about, depending on your perspective of DLC), but back then it was a shitstorm. Larry had to literally dedicate about a few minutes to saying "We don't dictate prices, Activision does." Whether or not that is the case is not for debate here.

I wanted to try this plastic instrument game. I had two problems, though. The first was that I was always late-to-the-party when it came to gaming. For instance, right now I'm playing Battlefield: Bad Company. The first one, not the sequel. I tend to play games long after the fact, or soon after release, rarely ever do I play games at launch. The only exceptions are Valve games.

The other was the cost. At the time, it cost $100 for a guitar controller and the game. I already found paying $50 a bitter pill to swallow when I didn't have much money to spend on games. $100 was at the range of "too rich for my blood." So when it came to Guitar Hero, I always said "$50 or bust." Hell, I had Guitar Hero II (for the PS2) in my wishlist for a while as I thought that was "the only rhythm game I need."

But then, fast forward to April 2009. I was irritated at my games design class because of an incompetent (but really nice) instructor, as well as not having the book needed to do the work for that week. So I left the class early and perused into a downtown Portland, OR GameStop around 7PM. GS was doing a sale on a bunch of games, including Guitar Hero: Aerosmith for all the major platforms. By either fate, chance or incompetence on GameStop's part, they had a concurrent deal where people who bought certain Guitar Hero games could get the Gibson Xplorer 360 guitar controller free of charge. One of those deals was Guitar Hero: Aerosmith, at a sale price of $10. I had to confirm this with a clerk, but they were pretty much giving me my first step into plastic rock for only ten damn dollars. 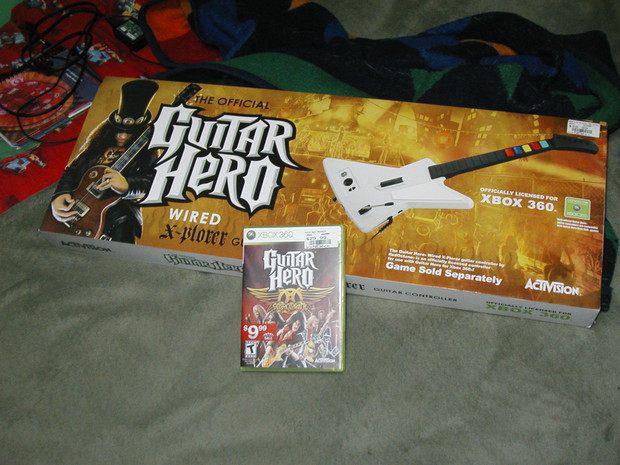 A famous Aerosmith song that I know and like is "Dream On." I always thought I'd have to "Dream On" if I wanted to get into the whole music game jazz. Well, Dream On no longer, here was my start. Not GH2 or GH3 like many others, but this one. But hey, it's a decent game nonetheless at $10.

A few days later I bought the game at a different GameStop, one closer to where I lived, and I started playing. Easy was a good starting point, then onto Medium, and then hit a few brick walls on Hard. While GH: Aerosmith isn't a great game (I'd only suggest it to Aerosmith diehards and those who don't mind paying $10 for a rhythm game like I did), it did get me introduced to "fake plastic rock." However, it's not my first experience with it: I had played a demo of the recently-released Guitar Hero III and failed Even Flow on Easy. Nowadays I could probably master it on Expert.

While I enjoyed the game, I was starting to get sick of the small 40-song setlist. Then a few months passed, and I got a chance to pick up a "better game," again thanks to GameStop: Rock Band 2 for $40. While I lacked a microphone and drum kit, I still had fun playing some of the songs. Kansas's "Carry On Wayward Son" and Bon Jovi's "Livin' on a Prayer" are guilty pleasures of mine.

Skipping to today, I now own four Guitar Hero games (GH: Aerosmith, GH: Smash Hits, GH: World Tour and GH5) and two Rock Band games (RB2 and The Beatles: RB). Around January, I ended up suffering from genre fatigue and series fatigue. Namely because I plowed through GH: World Tour's four career modes, suffering from sore fingers, loads of swearing (God damn you, Muse's "Assassin," why the fuck are you so hard on Expert Bass?!) and sweating (Drumming for an hour can work up a decent amount of perspiration). So nowadays I try to curb my rhythm game usage to about a few hours a week so I don't get outright sick of them.

One thing I like is how good some players are. You may have heard of some famous GH and RB players, like "GHPhenom" and all that jazz. While I'm not a master player (I can get through some songs on Expert Guitar and Bass, and I'm slowly working through Hard Vocals and Drums), I do appreciate these guys efforts. Yeah, some of them are part of the point-squeezing ScoreHero crowd who make the games have their little challenges of their own, making it like a crazed, fucked up meta-game; but I appreciate them because they put a lot of practice and effort to go through even the most difficult songs, and give me the courage to ramp it up and eventually never have to play on anything on Hard as a "safety blanket" anymore.


While I will probably never be as good as this guy, I can be surprised that every developer tries to throw in that "tough as nails" song and yet see somebody go through it and get 100% on it like a hot knife through butter. (GHPhenom playing the Smash Hits version of Psychobilly Freakout)

But that's not the only thing I like about "fake plastic rock." I like how it's opened me to more music than I ever have. Barring the obsession that some communities have over getting some 2000s-era "throat metal"* band as Rock Band DLC, I am glad that these games have opened me to looking into various genres (and artists) of music more and more, most of which I had either heard a bit of or were new to me. For instance, last weekend (2/27-28) I actually dug through my parents large (probably 100+ albums or so) CD collection. Outside of occasional times where I crack open Grooveshark and listen to choice RB/GH tracks, I listened to the following albums over the course of that weekend:

- David Bowie's Let's Dance
- Dire Straits' self-titled debut album
- Traveling Wilburys Vol. 1
- Third Eye Blind's "A Collection" (A greatest hits album, but had songs I heard a lot through radio and parents listening to them)
- Paul Simon's "Concert in the Park" (This album influenced me to ask for Graceland for Christmas, which I got, as well as "There Goes Rhymin' Simon." I appreciate Harmonix for putting Simon and Garfunkel's "The Sounds of Silence" as Rock Band DLC, because you can't go wrong with Paul Simon.)
- Nirvana's "MTV Unplugged in New York."

Of course, I might listen to more albums after I write this, but this is just a chunk of what I've been listening to. Some of these albums have songs that have appeared in rhythm games I've played, and I found more songs I ended up liking. I'm not alone in this type of thinking, according to some reports people who had their songs appear in rhythm games got increased sales as a result, like Dragonforce. I knew them for being the background music for silly YTMNDs years ago. Most others know them for "Through the Fire and Flames" in GH3. Even the most obscure and lesser-known bands probably appreciate the increased exposure they get from their music, even if it can have a negative effect of "I heard it from Guitar Hero" and people getting agitated about that. Jack White of The White Stripes and the Raconteurs even said how sad that kids are finding new music from these games instead of other means. Oh well, you can't please everybody. But then you see these interpretations of music in the games like below, which are fascinating to me:


Elison Cruz playing GH5 and RB versions of Nirvana's MTV Unplugged performances of "About a Girl" and "Come As You Are," complete with using the MTV performance as the backdrop. This gives an interesting interpretation to the songs, with a wonderful "Music meets video game" feeling to it.

While people are probably getting sick of the whole genre due to Activision's unnecessary over-saturation of Guitar Hero last year, I'm not sick of it just yet. While I do consider Rock Band 2 and Guitar Hero 5 the best in each respective series, there's room for improvement. Hopefully there will be that "perfect game" that gets all the features people asked for, and more, along with a solid set list. Then I probably won't ever buy another rhythm game unless it's for dirt cheap.

So, I have to thank Harmonix, Neversoft and Activision, and even those other companies who've had a hand in some rhythm game at some point, for rekindling my interest in music in ways that's almost similar to what my parents used to do long ago: Pop in albums from Abbey Road to Nevermind, and groove to the tunes.