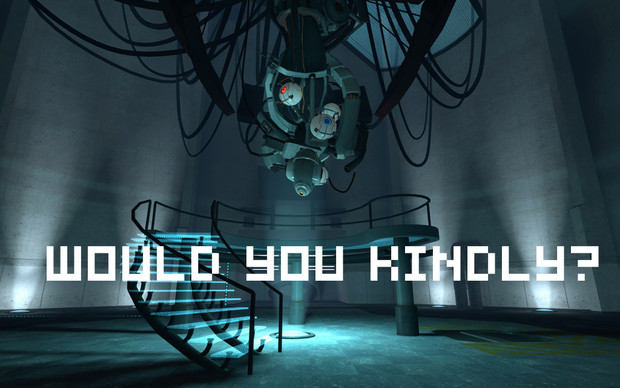 So Portal 2 was officially announced today, and there was much rejoicing. But, this being the internet, there was also some cautious optimism, some trepidation, and some outright negativity. "No!" shouted some people. "Portal was a complete story! Why ruin it with a sequel?" Others invoked another controversial sequel, Bioshock 2. Commenter runtheplacered write:

"It's NOT Ok to make a Bioshock sequel because the first games story was perfect and had the makings of a classic. Leave it alone, right?

But it IS Ok to make a Portal sequel because the first games story was perfect and had the makings of a classic. Am I right about this?"

There may be some merit to this argument. That remains to be seen. But for right now, I can see more reasons to be optimistic about a Portal sequel.

I haven't played Bioshock 2 yet. Hopefully that will change this week (I'm currently waiting for my connecting flight at the Charlotte Airport, which will take me home for spring break, which is where the 360 is. This is also why this blog may seem a bit rushed... Can't miss my flight). When it was announced, I was one of the skeptics. I've warmed to the idea now, though. With that out of the way, let's get into my argument...

Bioshock and Portal have a lot in common. Both are games with great gameplay, enhanced by a well-told story that makes full use of the strengths of the medium. Bioshock's collectible audio diaries and intricately designed environments enhanced the backstory of the rise and fall of Rapture in addition to moving the plot forward. In Portal, GLaDOS's constant, hilarious narration hinted at sinister secrets, while exploration would reveal the "Ratman's" incoherent ramblings that deepened the feeling of conspiracy.

So why are am I, among other people, more readily able to embrace the idea of a Portal sequel than a Bioshock sequel? The difference lies in what each game set out to do. The main attraction of Bioshock was its story. Everything in the game was structured to advance its plot, its critique of Ayn Rand, and its exploration of Rapture. This was all wrapped up in a fun, although not terribly unique, FPS. Portal, on the other hand, is a puzzle game with a unique gameplay concept, one that seemed fresh to most players. People came for the portal gun puzzle-solving, and ended up loving it for its Companion Cube and end-credits sing-alongs.

Portal was, as you know, a short game. Valve only scratched the surface with the types of puzzles the portal gun makes possible. I think Valve will be able to explore these without harming the story presented in the original. In fact, I think that Portal's story left enough open at the end that a sequel can easily make sense (GLaDOS is still alive, after all). And if the Game Informer cover is any indication, it looks like we'll get to explore environments outside of the sterile lab environment and grimy underbelly of the Enrichment Center.

So in conclusion, don't worry, [BLOG READER NAME HERE]. Portal 2, at least in theory, looks like it has the potential to expand on the original without harming its legacy.
#Commentary    #Community
Login to vote this up!