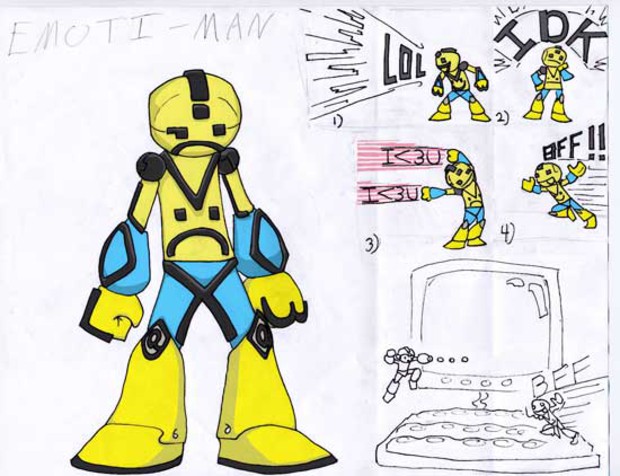 Here are my impressions-

* I've played all of the eight stages, but only beaten five of them. I'm using E tanks a lot, much more than I did in Mega Man 9. Part of that is that I'm trying to get through it as fast as I can in case I'm needed for the review, and part of that is because I'm really curious about how the game's story will end.

* Speaking story, it really does feel like this may be a direct prequel to the X series. There is a virus that only effects robots that makes them sick, then turns them "bad". It's pretty much the same idea as the X games. Also, Mega Man and company have just totally accepted Dr Wily as being their friend now. It's adorably stupid.

* Proto Man still gets his ass kicked pretty hard. I haven't checked to be sure if he still takes double damage, but I do know that I personally haven't been able to beat a level with him. He also has to pay almost twice what Mega Man pays for E tanks at the shop.

The good news is, Tango from Mega Man V (gameboy version) is in the Proto Man shop. It's a nice little shout out to older, more diehard Mega Man fans.

* Along with tango, it's nice to see the little cyclops robots from Mega Man 1 and the giant shrimp from Mega Man 2 make a comeback.

* The music isn't as good as Mega Man 9's. I really like Solar Man's music, I mean, really like it. I'd say it's up there with Galaxy Man's an Tornado Man's music. The rest of the tracks are range from good to just passable. Strike Man, Nitro Man, Pump Man, and Chill Man have music that will grow on you, but none of it is as immediately awesome as older Mega Man themes.

I also appreciate that none of the music is directly lifted from Mega Man 2. There are a few familiar themes, but they are all remixed.

* So far, the new weapons aren't that fun to use, but the bosses are really fun to fight. Nitro Man sticks out in particular. He's a total badass..

* The stages are really well designed. Overall, I think they are as goo as Mega Man 9's, maybe a little better in some cases. I was worried that the level gimmicks wouldn't feel fresh this time, but I was wrong. Blade man's level is a little dull (HA!), an maybe plays too much like Knight Man's stage from Mega Man 6. Other than that though, all the stages have been a lot of fun.

* There is a lot of content unlocked from the start of the game. Time attack mode, Challenge mode (which is actually a lot like Mega Man: Powered Up's Challenge mode), Easy mode, and the previously mentioned Proto Man mode, all make it hard to know exactly where to start when booting up Mega Man 10 for the first time. Undoubtedly, Mega Man 10 is a bigger game than 9. I think Challenge mode has 87 stages so far? Maybe more when you unlock them?

So yeah, it'll be a while before I've seen everything this game has to offer.

OK, 24 is over in nine minutes. Then I'm going to get back to playing. If you've got the game, let me know what you think of it!

[Update: Just figured out how to actually use the Wheel Cutter and a few of the other weapons that I didn't experiment enough with at first. They are actually pretty awesome.]

[Update 2: Forgot to mention that there are branching paths like in Mega Man 4, 5 an 6. Also the first mid-boss in Wily's castle is AMAZING.]
#Community
Login to vote this up!