My rant: Is Sonic the new Mega Man? also: some other points, and cocks.

7:36 PM on 02.28.2010 (server time)    0
Hello all, I would say this is my first real post on the site, even though technically it was this beaut right here. I�ve actually been an avid fan of Dtoid since the Gerstmann shiz went down, but that�s besides the point. I came to talk about some blue dudes. 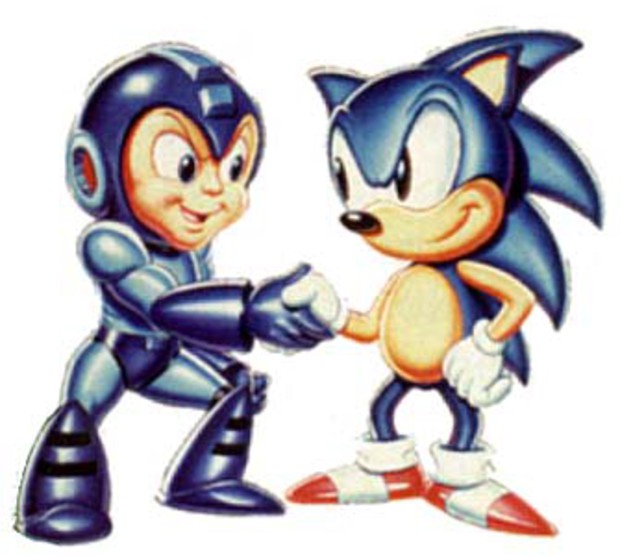 I�ve been playing quite a bit of Sonic CD and Mega Man X lately. These two games are pretty much polar opposites (we�ll get to that in a minute), but both are perfect examples of why I am excited for Sonic 4 (okay, cautiously excited) and Mega Man 10/X9 (?!?!).

Lets start with the hard one. We all know Sonic hasn�t been at his best this past decade. Many people discount the entire series, questioning if the original games were even that good. To these people I say, download an emulator and play Sonic CD. When you watch video of the game being played or watch a friend play it, the game actually looks randomly cobbled together. If you actually play the game, there are so many moments where you go, �oh yeah, now this makes sense�. Most importantly, take note of how fast the gameplay is. It�s not. It�s slow as hell in a ton of places, and is never actually speedy save for the sections of fast running and dodging and the occasional (and I mean occasional) speed loop or tube you can roll through.

Now, let�s bring Mega Man into the picture. Mega Man, like Sonic, had his period of shaky games, but it was much shorter. Mega Man is also more respected in hardcore gamer circles (I�m not saying that there are less Sonic fans, but that Mega Man would be rated higher by Dtoid users). When played back to back, It�s actually amazing how different the two games are. Mega Man exemplifies a hard platformer. Sonic, on the other hand, is often considered much easier. Sonic only has 2 �moves�, jumping and charging his roll (not counting invincibility or shoes etc.). Mega man has a gun, and then gets more powerful after every act. Even with these stark ideological differences, they bear one cool similarity; both games often appear arbitrary and incohesive to the outside observer, but their true brilliant mechanics are revealed when you sit down and actually play them. In other words, both games generate a lot of �a-ha!� moments. And this brings me to �the now�. There is no reason not to be excited for Mega Man 10. Capcom has been on fire lately, Mega Man 9 being one of the many titles that has the hardcore fanbase clamoring for more. Even the mention of a possibility of a new 16-bit Mega Man gets people all riled up (Mega Man X9, or X3-2, or X2-3, or how about Mega Man XX? Then after that we can get Mega Man XXX. I�m thinking, �Dead or Alive X Mega Man cross-universe promotion game�. Capcom, I hope you heard that.). Sega, on the other hand, had quite the decision on their hands. Try to put any faith they have left back into Sonic Team and hope for the best, or take the original guys from there (if there are even any left) and put them with another studio, but on a more �consultant� level. Thankfully, they chose the latter.

Dimps is the studio behind Sonic 4, and here�s why you should�ve jizzed your pants the first time you heard that: they made Sonic Advance. If you don�t know, Sonic Advance was the last great 2D Sonic game. A bit after Sonic Team started being retarded, Sega contracted Dimps to make a Sonic GBA game. Dimps put out a game that made it clear that they truly did understand what made Sonic so great in the first place--it�s not the speed, it�s the platforming. Most of the game is slow paced, just like the originals, and has just as many classic �a-ha!� moments. This is something that Sonic Team has completely lost sight of, and in the face of extreme criticism and lamentation from their fanbase, completely ignores. This is Sega saying to the hardcore community, �We know, it�s been rough. We�re sorry. We dumped that loser. Please, please take us back. Let us be your new Capcom; your bidding is our command.� Even though they�re basically on their knees and giving us what we�ve always been asking for, we still find room to hate. Sure, be skeptical. I am. But don�t prejudge the game when Dimps has no relation to any of the past fecal matter that has been the Sonic franchise. I�m optimistic. I�d love to see more similarities between the Mega Man and Sonic franchises: Sonic 4, Sonic 5, Sonic CD2 (?!?!). So yeah, that�s the rant that I just absolutely had to get out.

Cake
#Community    #Retro
Login to vote this up!