Ever since I was 10 years old I've been addicted to this game. It first came out under the name "Tetris Attack" with Yoshi's face on the box, over the years the name has changed but the wonderful gameplay that this experience encompasses has remained the same. I remember the week that Tetris Attack first came out and I would play it all of the time against my friends and siblings. Nothing felt better than burying your opponent in garbage.

My local BlockBuster (RIP) held a Tetris Attack competition a few weeks after the games release and I felt confident in my skill so I entered. I remember being the youngest person there and to be honest the opponents I faced weren't that good. It took about 2 hours to go through the competition but I eventually ended up beating them all and taking home a Tetris Attack backpack and a free copy of the game. I would later go on to use the backpack until both straps broke and it became too damaged to fix, now it's in a box somewhere.

I remember going to school when I was about 6th grade tired as hell because I was up all night playing Tetris Attack. I would always play on Hard or the unlockable Super Hard mode. I probably beat this game three times a night for over a year. Sometimes I would get stuck on a computer opponent, usually the Raven, and I wouldn't give up until he was gone.

When I turned 17 my obsession with this game hadn't gone away. I was organizing competitions of my own in Billings Montana where I grew up. If I had a friend I made damn sure they would play this game. I had all of my siblings (1 brother and 2 sisters) and all of my friends in to this game like it was the only thing to play. We all played it and we all got quite good.

When I would visit my brother in Texas with my sisters we would all play and lose tons of sleep over this game. Even my brother's wife got involved in the fun. I started developing theories about the garbage blocks and strategies to use while playing. When I would watch my loved one's play Tetris Attack I would oftentimes coach them stating to "Lay your sheep down in clean pastures." Basically what that translates to is that I would remind them to keep their top layer of blocks as level as possible so it's easier to dispose of the garbage blocks. 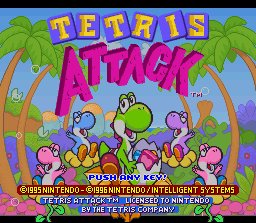 There were days when my younger sister would come over to my house and play this game. While waiting for her I would play the Endless mode until she arrived. One time she never came over when she said she would and I played endless until the time and score read all 9's and couldn't go any higher. My best friend Allen and I grew up playing this game together and normally he would help with setting up our town tournaments. Sometimes Allen and I would do team tournaments and join forces to dominate everyone else. He and I have had VS rounds in Pokemon Puzzle League's 3D mode that have lasted over 30 minutes (3 round wins are required to gain a point) so sometimes we would get together only to play one game since it would take 1 1/2 hours to finish.

I still stay in touch and play vs mode online in private matches with my siblings who have a Nintendo DS. I still play my N64 version of Pokemon Puzzle League and I still have a Supernintendo with Tetris Attack that I also play. I used to beat Tetris Attack on Super Hard mode without dying just to pass the afternoon. I even wiped through Pokemon Puzzle League's hardest difficulty and defeated mewtwo without any problems.

The above video is a game I played this week on a 2 minute score attack, I normally play vs but there was no way to get a recording of that... something I'll have to work on I suppose. I'll end on this note, I know I'm not the best at this game but I spent all summer in 2007 playing online against very skilled people who live in Japan and other parts of the world and my wins were 448 out of 576 total random matches. I wish players still went online for birthday battle and whatnot but nobody ever does; there are days where you'll find me searching for a match that will never be found. If any of you own this game we can do some friend code exchanging and play a few private matches.
#Community    #OpinionEditorial
Login to vote this up!