Decimation X is the best value of any indie game I've ever played, and that even includes "I MAED A GAM3 W1TH Z0MB1ES IN IT!!!1". Based on how many people have already rated it on XBLA, and the fact that it's supposably the #1 best selling and best rated XBL indie game in Japan, I'm guessing I'm pretty late to the Decimation X party, but I'm still gonna write about how much fun I've been having playing this little indie game for those of you who aren't already in the know.

Decimation X is essentially an over-the-top, big-dick-mother-f*cker version of Space Invaders--if that doesn't sound appealing to you, I should mention that I never really liked Space Invaders, but absolutely fell in love with this game after 10 minutes of play...something to think about. Dodge lasers, shoot aliens; a more hackneyed videogame formula there is not, but the fact that its creators (Jason and Matthew Doucette) managed to take such a contrived, boring videogame convention and make a game that somehow feels fresh and exciting is part of what makes this game so special. It's a real videogame's videogame; there are only two real buttons, move (left and right d-pad/analog) and shoot (A button/RT). As such, pretty much anyone can pick up and enjoy the game, but those planning to reach the higher levels will encounter some of the most brutal difficulty a videogame has to offer.

Graphically, the game takes the sort of retro/minimalist route. Lasers are just white lines and aliens are just different colored moving-shape (like red skulls or yellow boxes); the only non-retro flare the game has is the sparkey-explosions the aliens produce upon death, but it can look pretty spectacular when you're plowing through a whole wave, even if the explosions do distract you from the dangers of incoming enemy fire.

The game starts out fairly tame, with, at first glance, it looking to be just your garden-variety Space Invaders clone with a tiny ship, tiny bullets, tiny enemy fire, and some relatively big shields. You may ask yourself, "Why would they make the shields so big?", a question the game will enthusiastically answer for you about 15 levels in. After a few minutes of playing, you'll notice the volume of enemy fire increase from "laughably unthreatening" to "OH MY GOD THE UNSTOPPABLE DOWNPOUR OF LASERS JUST RIPPED THOUGH ALL MY SHIELDS LIKE NOTHING and now I'm dead...". Clear out a few waves and new tougher alien types will start to appear at the back of the wave formations that will fire at you more aggressively, will be capable of absorbing more damage, and, later on, will start to blink in and out of vulnerability (meaning they sorta appear and disappear so that alot of your fire just passes through them).

Luckily, the game provides you the tools to really butt-f*ck these little scuzz-bags, provided you employ the right tactics and have the scrotal sack required to nab the various crucial power-up items that fall amid the lasery chaos. Some items include "S": repairs for your shield, "I": an energy-field that acts as temporary invincibility, and "pT": plain old points, but lots of em'. Points plays a pivotal role in the game, as higher scores earn you extra lives and the occasional item shower, a screen-wide drop of items, of which you'll have time to grab about 6 or 7, so choose wisely.

The remaining items all relate to the real star of the game, and the real determinant of your success in Decimation X, your gun upgrades. Your gun, as far as I can tell, has no foreseeable limit to its upgradability...I've never seen this in a game before...and it's genius. Seriously, you can upgrade the shit outa your gun, like forever(ish). If that isn't gun-good, then I don't even know what the fuck gun-good means anymore.

"B" (Bullet: increases the number of bullets you are allowed on screen), and "P" (Power: increases the number of bullets per shot and bullet spread), "A" (Auto: increases rate of fire), and "R" (Rapid: increases the bullet's travel speed). Keep picking up these upgrades and your gun will go from a single-fire pee shooter to a cannon that blankets the opposite half of the screen with oblivion, at which point you can simply just wipe out waves of aliens with the flick of your thumb...until the stronger waves come and you need to finagle the means to further build-up your gun and defenses without getting hit by one of those alien-spick's lasers. If you get nothing else out of Decimation X, will want to keep playing just so you can see how obscene you can make your gun. 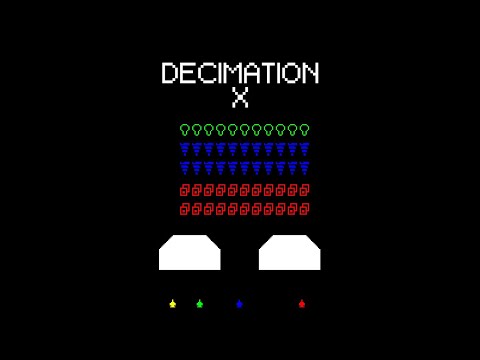 The struggle to avoid increasing enemy fire while trying to maintain your shields, strengthen your ridiculous gun, and mow down aliens is much more addicting than I would have ever thought. And as simple as the premiss may be, the strategy and tactics you must employ to survive when things get rough makes the gameplay especially deep. Just navigating through the narrow gaps in a field of lasers really does become an art at some point; I found myself trying to learn new ways to push the analog stick (tapping it super softly but quickly) to make the precise movements my ship needed to dodge laser in the thicker barrages. The game has some very special moments, like when you're almost out of lives and have no shield protection, you see an Invincibility drop within the field of lasers, you go for it knowing full well that you'll probably die in the process, and then you manage to narrowly snag it and proceed to blow away three waves of enemies, strengthen you gun, completely rebuild your shields, and get an extra life...man-o-man. Little moments like these can turn things around completely, and it's unbelievably satisfying when these desperate, hail marry tactics actually pay off for you.

You may notice in one of the images that I posted that the game supports 2, 3, or 4-person multiplayer...I wish I could comment on multiplayer, but sadly I've only played single player...4-player looks pretty sick though doesn't it (if someone's played it please let me know how it is). And, although right now there are no online leaderboards, I should mention that the game displays a message promising "Online leaderboards coming soon!" on the Game Over screen, and I've been told we can expect it to me up very soon (sometime in March or April I'm guessing?). Between this game and Chime, I'm getting some sick play value out of my XBLA games; I've honestly been playing more Decimation X than Bioshock 2 (which I just picked up).

That's all, just wanted to share some info about a game that's been providing me with enormous play-value for only a dollar. Trust me when I say that my description, as well as the images and movies I posted, don't really do this game justice--you need to play it for yourself. If you're a fan of quality minimalist games, man-level difficulty games requiring "mad skillz", or if you just like shooting lots and lots of shit at aliens, you are brain-dead if you don't at least play the trial version of this little gem.


#Community    #Indie
Login to vote this up!